From leaf cutting ants that cultivate fungus gardens to flowers that fool potential pollinating insects into having sex, the magic of rainforest ecology always inspired my love for nature’s creativity. So, it’s no surprise that any and every report of burning rainforests would rally deep concerns across the globe. Nonetheless I am disturbed by dishonest gloom and doom regards recent Amazon fires. NASA reports since 2003 the square kilometers of forest burned each year has dropped by roughly 25 percent. But such good news doesn’t get headlines.

Although the NY Times wrote the fires have no climate connection, meteorologist Eric Holthaus, who writes numerous catastrophic climate articles for Slate and the New York Times, suggested the fires show, “We are in a climate emergency”.  As of August 16, 2019, an analysis of NASA satellite data indicated that total fire activity across the Amazon basin this year has been close to the average in comparison to the past 15 years, but Holthaus dishonestly tweeted, “The current fires are without precedent in the past 20,000 years.”

To heighten global hysteria, French president Macron and actor Leonardo deCaprio, tweeted photographs of forest infernos. But those photos were taken 20 years ago. Likewise, Madonna tweeted wildfire photos taken 30 years ago, and others tweeted flaming photos from regions far from the Amazon.

Activist vegetarians denounced meat-eaters for deforestation, arguing forests are burnt to create pastures for cattle. But they failed to mention pastures previously created for grazing without deforestation, are now being usurped by biofuel cultivation. Indirectly, it’s the biofuel fad that has driven cattle grazers to carve out new pastures in the rain forests. 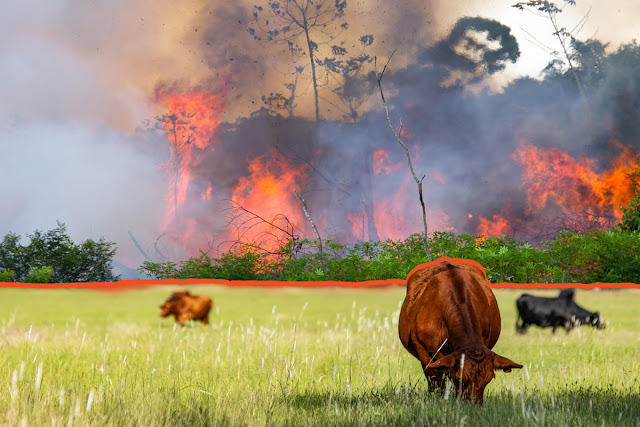 Left-wing politicos blame the fires on Brazil’s rightwing president Jair Bolsonaro, a climate skeptic. They argue Bolsonaro’s views emboldened land grabbers. But the number of Brazilian fires, and rates of rainforest deforestation were far worse before Bolsonaro, peaking in 2004 under a corrupt leftist Workers Party. It seems every tragedy is just an opportunity to demonize one’s opponents, no matter the facts.

Most 2019 fires have been ignited on land cleared long ago. To clear agricultural stubble or to prevent forests from encroaching on existing farms and pastures, Brazil’s farmers set fires as soon as the dry season begins. According to NASA, Brazil’s “agricultural fire season” traditionally peaks in July and August and ends by early November. To date, there is no data determining the extent of area burnt on existing farms and pastures, versus how much rainforest has actually been lost to fire.

As the saying goes, the road to hell is paved with good intentions. Between 2000 and 2005 an estimated 45,000 square miles per year of rainforest were lost worldwide as biofuel production ramped. Currently only 2.3% of Brazil’s agricultural lands grow biofuels. But that will increase as governments require fuels blended with increasing percentages of biofuels. Most projections suggest biofuels will dominate 36% of arable lands by 2030. More encroachment on rainforests is likely.

Brazil leads all developing countries in biofuel production. Thus, Brazil is at the center of scientific disputes regards biofuels and deforestation. Brazil is the leader in sugarcane production for biofuels. Sugarcane is typically cultivated on disturbed fields far from rainforests, so, there is no evidence of direct deforestation. But there are definitely indirect impacts. As sugar cane fields expanded throughout southern Brazil, soybeans increasingly grown for biodiesel were pushed northward into central Brazil. In turn, usurped pastures pushed cattle grazers further northwards into rainforests.

Nearly 55 million Brazilians live in poverty. Slash and burn agriculture is often practiced by poor farmers. To achieve a win-win solution for rainforests and humanity, we need more efficient land use. But fields once growing food, are being transformed into fields for biofuels. To make-up for lost food production, pristine lands elsewhere are cleared and burnt for new agriculture.

Still there’s hope. America’s early colonists deforested the land and drained wetlands. Marginal farms deforested 80% of Vermont by 1900. But as more efficient land use evolved, marginal farms were abandoned, and Vermont is now 80% re-forested. Similarly the UN’s State of the World’s Forests 2018 reports global net loss of forest area continues to slow, from 0.18 percent per year in the 1990s to just 0.08 percent over the last five-year period. If Bolsanaro’s pro-agriculture advocacy generates greater agricultural efficiency, Brazil’s forests should likewise benefit.

Although there have been admirable attempts by the international Amazon Fund to promote sustainable rainforest agriculture, it has not been enough to raise Brazilians out of poverty. Worse, In the name of fighting climate catastrophes, biofuel subsidies and incentives encourage destruction of Brazil’s rainforests and savannahs, while displacing small farms. We must wait and see but having a newly elected skeptical president in Brazil might be a godsend. Better agricultural practices may evolve if Brazil’s government is not blinded by the false promises of biofuels!

Having more closely examined the photo I downloaded from the internet of cattle and burning forests, I suspected the red line in the photo suggested it may have been photoshopped. I was just contacted by another scientist suggesting the same thing.

Although it doesn't affect the issue of biofuels, it is likely  another example of how photoshopped pics can be easily and incorrectly used. Although it nicely juxtaposes the fires with cattle,  I warn viewers that the picture is likely photoshopped and I apologize for having used it.