With their clownishly colored caterpillars and bold black and orange adults, monarch butterflies get featured in most children’s nature books. Monarch’s ability to migrate thousands of miles, is one of nature’s greatest wonders. But worrisomely, monarch abundance plummeted by 90% over the past 2 decades. Fearing monarchs could be vulnerable to extinction, the US Fish and Wildlife was petitioned in 2014 to list monarchs as “Threatened” under the Endangered Species Act. But due to several contentious issues, more extensive studies were needed. A determination is now expected by the end of 2020. So, what is killing monarchs?

In the 1970s scientists discovered that virtually the entire population of monarchs that breed east of the Rocky Mountains, migrate to extremely small patches of high mountain forests in central Mexico. There they spend the winter from November to March. Since the early 1990s, scientists began estimating monarch abundance by measuring the areas occupied by wintering butterflies. The greatest winter abundance, estimated in 1997, was confined to an area equal to 40 football fields. By 2013, wintering monarchs occupied less than 2 football fields. 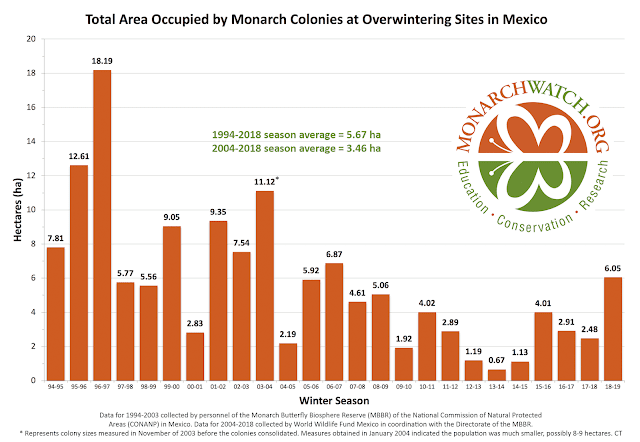 In January 2002, a winter storm brought cold rains followed by clear skies. Without the clouds’ greenhouse effect, clear skies allowed temperatures to plummet to 23°F (- 4°C). Still damp, millions of butterflies simply froze in place. Many millions more fell to the ground creating an eerie carpet of dead and dying butterflies several inches deep. Altogether, 500 million butterflies died that winter, killing 80% of the entire eastern population. That the survival of the entire eastern monarch population could hinge on conditions affecting such a small area became a huge concern.

Such devastating effects from freezing storms emphasized the need to protect the forests where monarchs spend their winters. The intact forest canopy creates a microclimate that had protected monarchs for hundreds of thousands of years. A closed canopy inhibits freezing. But recent logging opened the canopy and enhanced rapid cooling. The Mexican government eventually agreed to ban all logging wherever the butterflies overwinter. Nonetheless, there has always been significant winter storm fatalities. So, a few degrees of global warming would minimize those cold weather massacres.

(In contrast, monarchs breeding west of the Rocky Mountains migrate to forests along the coast of California each winter where freezing is not a concern. The bad news, populations are still collapsing, and monarchs choose to winter in introduced Eucalyptus trees that many people try to eradicate. It remains to be seen how Eucalyptus will be managed.)

Every scientist agrees 2 key factors are reducing monarch abundance. First is degradation of wintering habitat. Second is the loss of milkweed, the caterpillars’ only food plant. The good news is humans are working to restore landscapes to benefit monarchs. However, media outlets hyping a climate crisis, falsely claim climate change is thwarting our attempts to protect the monarchs. But whether global warming is natural or man-made, warmth benefits monarch survival.

Despite horrific winter losses, monarch populations can rapidly rebound. Surviving adults leave their Mexican wintering grounds in March, and soon arrive to breed in Texas and other Gulf Coast regions. They lay eggs, then die. One female can lay up to 1100 eggs. However, for each female, perhaps 40 eggs survive to produce the next generation of females. Depending on temperature, the transformation from egg to adult takes 30 days. Wherever temperatures are favorable, 3 to 4 more generations can be produced throughout the summer. So, a single female arriving in Texas can eventually give rise to 6400 adults by the 3rd generation.

Monarchs also actively control their body temperature. Caterpillars feed on the top of milkweed leaves during cool weather to enhance warming by the sun, but feed underneath the leaves as temperatures rise. If midday temperatures get too hot, caterpillars seek shelter in shaded leaf litter.

Monarchs linger in their Mexican winter habitat waiting for optimal spring-time temperatures to develop in the USA’s Gulf Coast states. As summer conditions become too warm along the Gulf Coast, monarchs then migrate northward. Favorable warm temperatures, in places like Kansas, allow 4 new generations each year. Further north in cooler Minnesota, only 2 generations are possible. Thus, favorably warmer temperatures allow more generations per year, and more generations allow the monarch’s abundance to multiply and quickly rebound from their winter losses. The 2019 winter count determined wintering monarchs tripled their abundance from their 2013 low point. 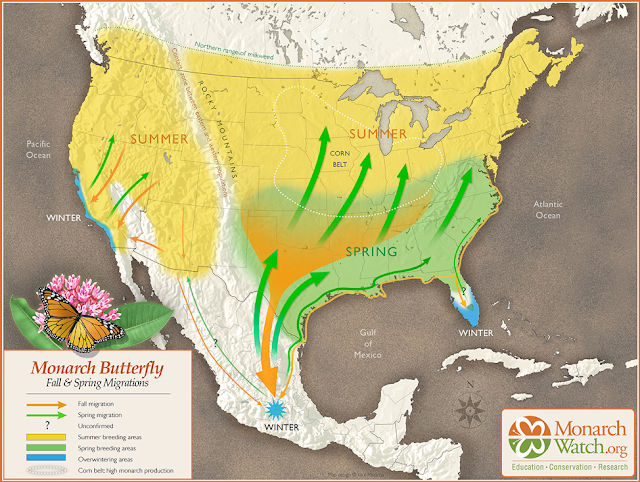 Of course, each generation is also dependent on their food plant abundance, which landscape changes and pesticides greatly affect; a topic for part 2.