The Cooling Side of Greenhouse Gases 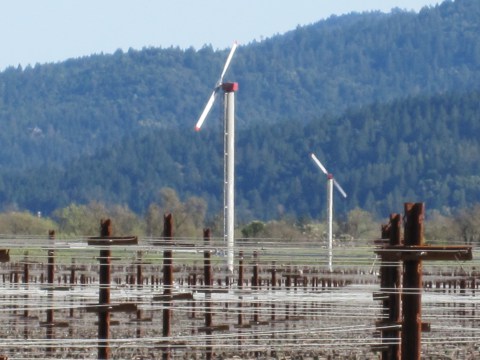 Most people are unaware that the greenhouse gases CO2 and H2O, both warm & cool our planet. When I mention that CO2 has a cooling effect, I’m amazed by the hateful tirades from paranoid people who dismiss scientific truth as “dangerous misinformation”.

However, discussions about temperature inversions have occasionally induced more respectful debate with critical thinkers. Most people have observed “frost fans” erected in orchards and vineyards, so are interested in why they work. Frost fans disrupt freezing layers of surface air that can develop at night during the spring, damaging flowers and fruits. Frost fans simply pull warmer layers of air from above down to the surface raising minimum temperatures. But why does that warmer layer of air exist?

During the day, earth’s surface absorbs both solar radiation and the downward infrared heat emitted from greenhouse gases. Absorbing that energy faster than it can emit infrared back towards space, the surface warms. However sunlight doesn’t heat the lower atmosphere (aka troposphere) directly. Nitrogen, oxygen and argon comprise ~ 99% percent of our atmosphere and is transparent to incoming solar energy. Furthermore, unlike greenhouse gases, those gases neither absorb nor emit infrared energy. The troposphere warms primarily by gaining energy via collisions with a heated earth surface. During the day, the warmest air layer lies closest to the heated surface. Rising warm air causes turbulent mixing and collisions with cooler air above that raises air temperatures there. However because air cools as it rises due to decreasing air pressure, warming is limited.

Without solar heating, earth’s surface cools by emitting more infrared heat than it absorbs from recycled heat emitted by greenhouse gases because greenhouse gases don’t intercept all emitted heat. “Atmospheric windows” allow about 23% of the surface heat to escape directly to space without being recycled. The air layer closest to the surface then cools by transferring heat to the colder surface. However, higher air layers can’t sink and collide with the surface again unless they lose their heat. But nitrogen, oxygen and argon can only shed that energy by colliding with cooler greenhouse gases which will absorb their energy and emit half back toward space.

Outside the tropics, inversion layers more readily form in winter and spring. The earth’s surface holds less heat during winter’s reduced solar heating. Where people use fireplaces to stay warm, inversions layer are revealed by rising smoke that suddenly flattens when it encounters the warmer air above. Frost fans work by drawing down warmer air layers to mix with cooler surface layers, and thus protect crops from freezing. Similarly, months of “polar nighttime” cools Antarctica’s interior surfaces to as low as −89.2 °C (−128.6 °F), creating a continent?wide inversion layer. When above average surface temperatures are periodically reported, it’s often the result of high winds that, like a frost fan, disrupted Antarctica’s inversion layer. 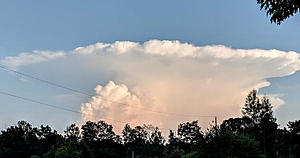 Our atmosphere also has a global inversion layer. Above the troposphere, is the warmer stratosphere where temperatures increase with altitude due to absorbing solar UV. Because CO2  in a warmer stratosphere emits infrared faster than it absorbs it from the troposphere, more CO2  cools the stratosphere. (For similar reasons CO2  has a cooling effect in Antarctica.) Furthermore storm clouds bring the tremendous amounts of heat stored in water vapor to the stratosphere. Again we can see where the warm inversion begins as clouds stop rising and develop an anvil shape at the stratosphere. Because the stratosphere is nearly devoid of water, the wavelengths of infrared heat released as water vapor condenses to liquid and ice, mostly pass freely to outer space, without recycling it back to earth.

If these dynamics were better understood, people would more likely laugh at climate catastrophe narratives rather than succumb to paranoia.