watch the video
KENTUCKY TORNADOES, CLIMATE CHANGE,
AND PRESSURE SYSTEMS
https://www.youtube.com/watch?v=G4sZnwiUogE&t=184s
below is the trasncript 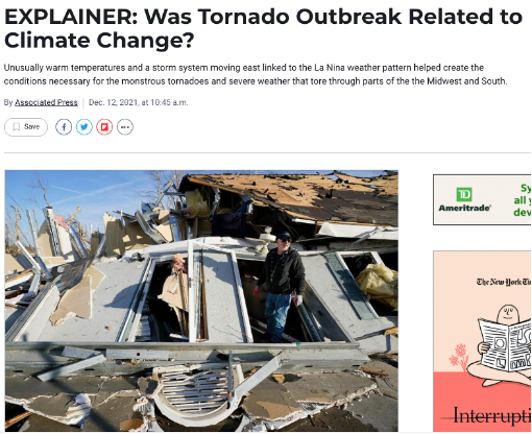 The heart wrenching devastation in Kentucky and surrounding regions due to several tornadoes has caught everyone’s attention. Fortunately, meteorologists have been increasingly capable of issuing tornado warnings and have greatly reduced tornado related deaths. But despite adequate warning, one tornado took direct aim on Mayfield, Kentucky causing buildings to collapse and a horrible death toll.

The USA experiences more tornadoes than elsewhere, suffering over 1100 a year. This is due to the mountain configurations that funnel cold, dry Arctic southward to collide with warm moist air from the Gulf of Mexico moving northward. Tornadoes are most common in the spring as solar warming drives warmer air northward to collide with retreating cold winter air. Although rare in winter, tornadoes also happen.

Disturbingly, every disaster brings out the ambulance chasers hoping to profit from tragedy. As has become all too common, the ambulance-chasing climate journalists wasted no time trying to attribute climate change to this catastrophe, as seen by the Associated Press story that is being circulated by many outlets. Despite most scientists admitting attributing tornadoes to climate change is extremely difficult, the AP journalist tried to force a connection with statements like, “Warm weather was a crucial ingredient in this tornado outbreak” and the standard blather “extreme storms are becoming more common because we have a lot warmer air masses in the cool season that can support these types of severe weather outbreaks”.

But lets look at the Science! 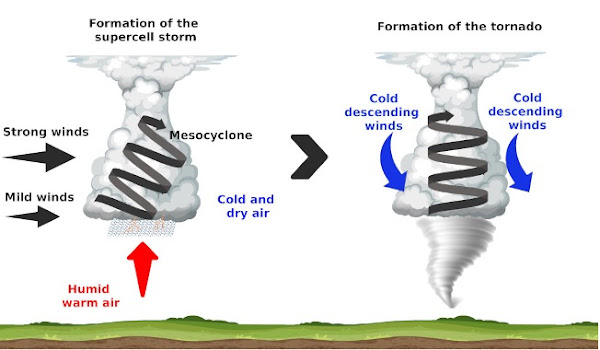 I noticed all those tornado-promoting conditions developing the day before. So I am sure weather forecasters did too. Below are screen shots from the website https://earth.nullschool.net/ ,  a site I highly recommend for everyone who is interested in understanding weather and climate. I roughly overlayed a map of American states to help visualize the approximate locations of tornadoes, and a green circle to identify the location of Mayfield, Kentucky. The first screenshot shows cold air (blue color) from the west and Arctic colliding with warm air (orange color) intruding from the Gulf of Mexico. Temperatures in the Gulf of Mexico are just average, so the intruding warm air is not unusually warm, but raises Mayfield, KY temperatures to about 70°F. However what is unusual is the below average cold over the Great Plains.

The white lines represent the surface winds. The brighter the white, the stronger the winds. On the website the winds are animated, so I have added red arrows to show wind directions. Temperatures around southeastern Kansas are about 40°F. Thus, cold winds from the northwest colliding with warm air from the south create the lift and spin needed to spawn winter tornadoes.

The next screenshot is taken for the exact same time, but with an overlay of the atmosphere’s Total Precipitable Water. The cold air to the west and north is very dry (brown color), The warm air intruding from the Gulf of Mexico is very moist (blue color). Thus, all the conditions to spawn winter tornadoes are in place throughout the Mississippi River Valley.

It is also well established that a dip in the jet stream, as cold air pushes southward, is associated with extreme weather events and tornadoes. At the bottom of the trough wind speeds are slower but increase as the winds exit the trough to the east. This increase in upper level wind speed promotes a stronger low pressure zone at the surface that intensifies cyclones and tornadoes. 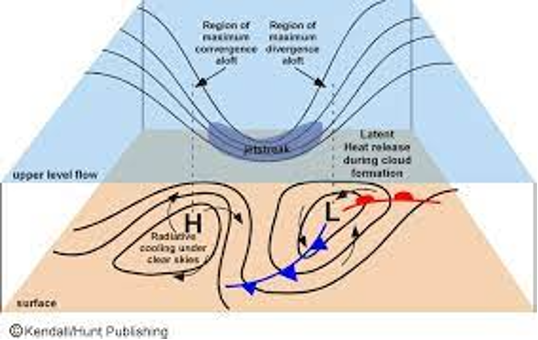 Accordingly the next screen-shot of the upper level winds at 500 hPa (approximately 18,000 foot altitude), shows an upper level trough forming to the west of Kentucky, and the town of Mayfield is situated below the region where the jet steam is increasing speed.

So why did these conditions develop? One piece of the puzzle is the location of the Bermuda High pressure system, and its clockwise circulation of winds. The Bermuda High is a key factor affecting tropical weather as well as how much warm moist air gets pumped into the eastern USA. Scientists compare the ever-changing position and strength of the Bermuda High to the motion of a cork in the bathtub. Various waves and disturbance readdiy shift its location making weather predictability difficult, never mind determining any climate trends. When located further east in the Atlantic, droughts occur in the Midwest, and even the eastern USA. The further west the Bermuda High’s location, the greater the amount of warm moist air gets pumped into the USA. 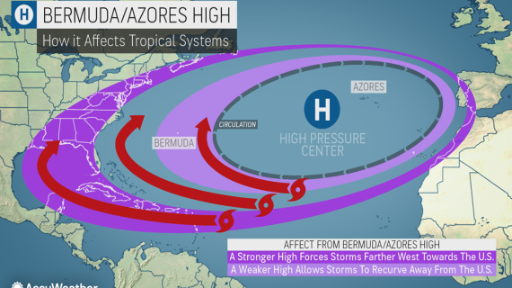 One factor affecting the location of the Bermuda High is the natural North Atlantic Oscillation (NAO) which can change its phase from month to month. When the NAO is in its positive phase, pressure increases as well the strength of the Trade Winds. This pushes the Bermuda High further westward. The NAO is used in weather forecasting. While recently bouncing between positive and negative phases, scientists had determined the NAO would remain in its positive phase through mid-December 2021. As a result, warm moist air was indeed pushed up the Mississippi River Valley in winter, supplying the key ingredients that spawned the deadly winter tornadoes in Kentucky.

The mainstream media’s exploitation of this tragedy it is just another example of ambulance-chasing climate journalists failing to inform the public about natural dynamics that create  extreme natural weather events, choosing instead to fear monger a bogus climate crisis narrative. 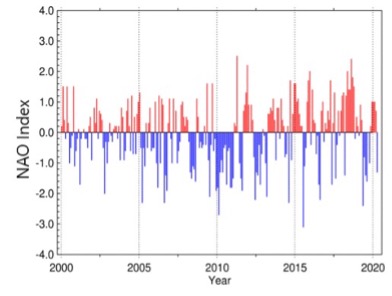 The mainstream media’s exploitation of this tragedy is another disturbing example of ambulance-chasing climate journalists failing to inform the public about natural extreme weather events. Just as I finished crafting this presentation, I see Dr Roy Spencer published an article on the how increasing cold weather increases tornadoes. Spencer posted this graph that documents the declining trend in violent tornadoes, again refuting the idea that global warming is related to more destructive tornadoes 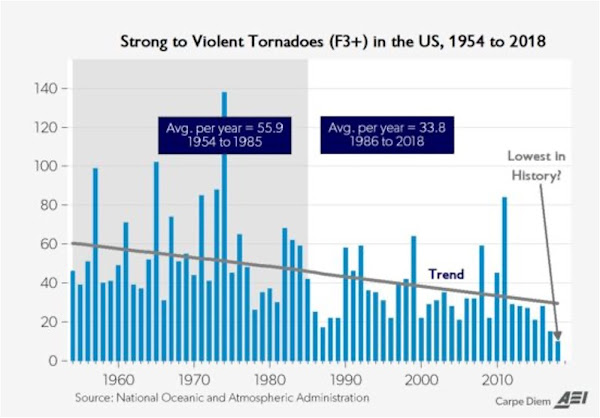 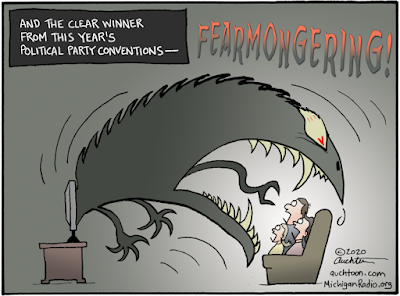 Sadly President Biden, despite lacking any scientific knowledg,e joined the fear-mongers with the standard blather stating "The intensity of the weather across the board has some impacts as a consequence of the warming of the planet and climate change ...the fact is, that we all know everything is more intense when the climate is warming. Everything. And obviously it has some impact here.”
Really Joe???
Posted by Jim Steele at 1:03 PM 1 comment: