This is the transcript to the video 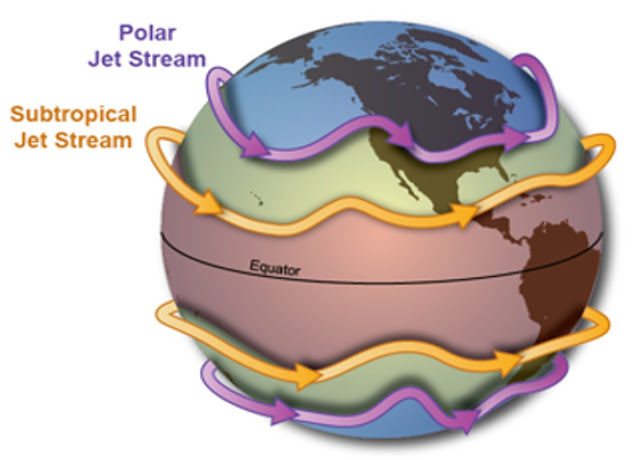 This is part 2 of the big 5 natural causes of climate change: focusing on jet streams and extreme weather. Jet streams are high-altitude, fast-moving, narrow bands of winds that separate cold arctic air from warm tropical air. Jet streams are key to understanding climate change because they both create weather and steer weather around the globe. Unlike global warming, jet streams undeniably cause both extreme heat waves and extreme cold snaps as well as directly causing droughts and floods

Jet streams cause extreme weather when their waviness increases and causes weather patterns to linger over a region longer than normal. Examinations of the jet stream's cycle of waviness was first published by MIT’s Carl-Gustav Rossby in the 1940s.

To honor his profound contributions to understanding atmospheric circulation and its effects on climate, wavy jet streams, as well as other wavy circulation patterns, are called Rossby waves

The index shown here is just for the winter months, as that's when the earth's oscillation is the greatest. However, the index here uses annual averages that don’t reveal critical monthly changes in waviness. 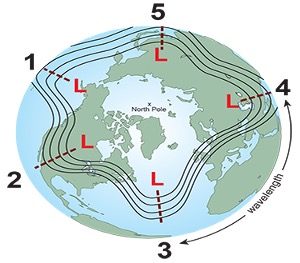 The dynamics that drive the north Atlantic oscillation also drive the more global arctic oscillation. The illustration shown here shows the jet stream encircling the earth in 5 long waves. But with better satellite data we now know the jet stream may exhibit just 2 waves or many different numbers of waves depending on interactions with other climate dynamics.

A wavy jet stream generates its own weather. 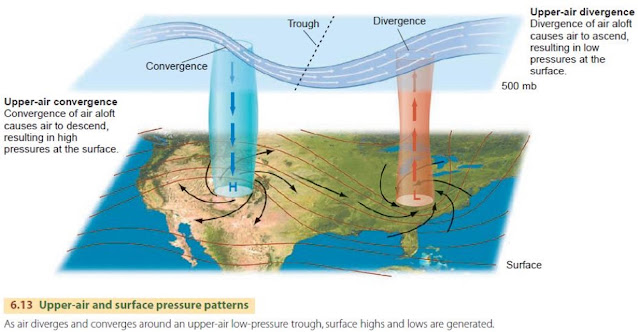 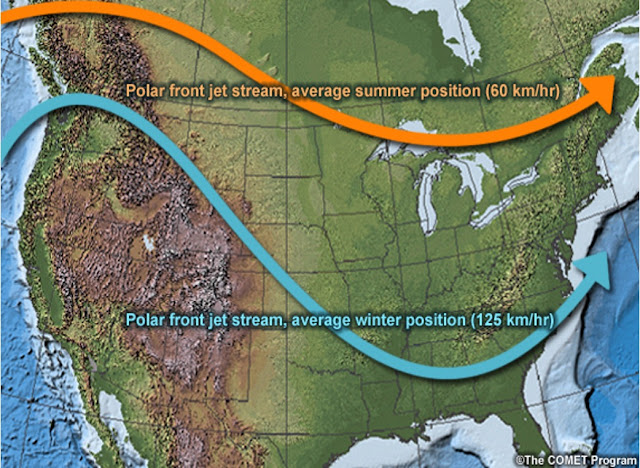 Some of the observed global warming since the end of the Little Ice Age is due to the ITCZ’s and jet stream's northward migration from its much more southward location 200 years ago.

The dry high-pressure system forming beneath a jet's ridge, pulls warm tropical air northwards on its western side as well as promoting clear skies and greater solar heating.

The low-pressure system forming in the jet stream's trough pulls colder arctic air southward as well as promoting cloudiness and rain. This dynamic partially explains why the south- eastern united states has long been dubbed a "warming hole."

That warming hole gets obscured by temperature statistics that are averaged nationally and globally. However, a recent study shows that 34% of all USA weather stations with at least 70 years of data, (represented by blue dots), exhibit cooling trends and most are concentrated in the jet stream's trough.

Knowing that published temperature data, when the government falsely claims in its "Climate Resilience Tool Kit", that cities in the southeast are at risk due to heat from climate change, that false claim only generates mistrust for the government's climate science narratives

Aligning with Rossby’s observation that the jet stream's greatest waviness occurs during winter when the reservoir of cold arctic air reaches a maximum, the jet stream dove deep into the southern United States between February 12th-19th, in 2021. Arctic air caused the regions colored purple to remain below freezing for over 160 hours.

Global warming was unlikely to have had an effect as that cold snap resembled the cold snap of 1899, also in February. Judging from san Antonio’s 7 coldest temperatures, these extreme cold snaps happen every few decades 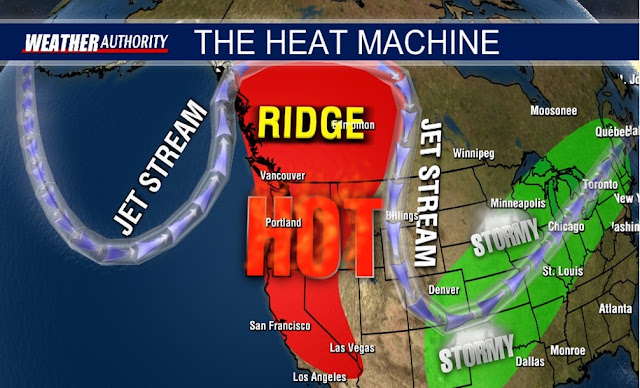 In line with expected temperature variations that wavy jet streams cause, while the north-west was baking, the southwest was cooler than normal. Western North America’s geography appears to favor a wavy jet stream pattern 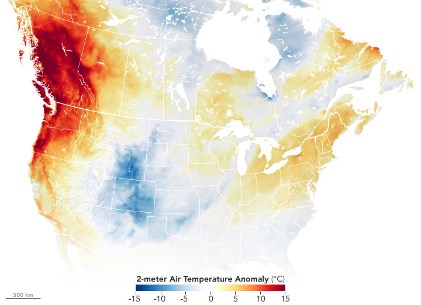 A pseudo-science group called "World Weather Attribution" claimed their analyses showed it would be impossible for the Lytton heat wave to happen without human caused climate change. Similarly, click bait media and alarmist scientists echoed the same narratives. But the scientific evidence does not back them up!

A recent 2022 peer reviewed study shows this region has been cooling for the past 30 years. 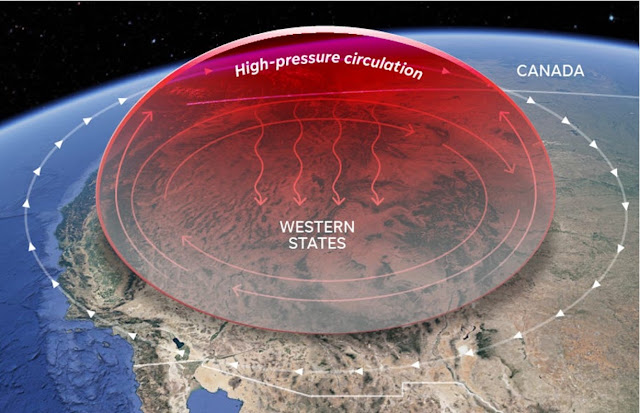 The Rocky Mountains and the ocean and land temperature differences frequently promote jet stream waviness over North America’s west coast. Small disturbance in the jet stream's summer flow can quickly evolve into an omega block and a heat wave. The evolution of a fluid's looping flow is common in all the earth's currents..... Be it water or be it air.

My research with meadow restoration observed that evolving dynamic in meadow streams. Small differences in surface hardness causes small waves to evolve in the stream's channel. The wave's curvature alters the stream's speeds which naturally amplify the waviness over years, and the stream erodes the banks to evolve into omega configurations. Eventually the waviness amplifies enough to cause that part of the channel to break off from the main flow forming stagnant oxbow lakes. 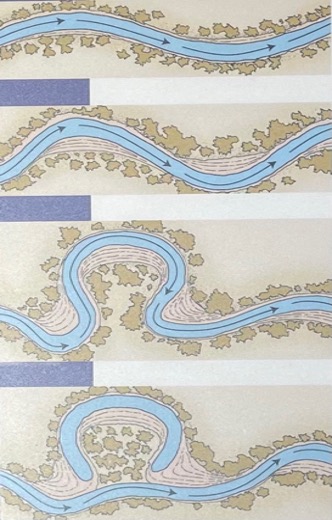 Unconstrained by the land, the same natural flow dynamics cause eddies to pinch off from the main flow of the Gulf Stream in just a matter of days.

Likewise small disturbances to the jet stream cause omega blocks and eddies known as cutoff lows or cutoff highs to evolve in just a few days, no matter how climate is changing. 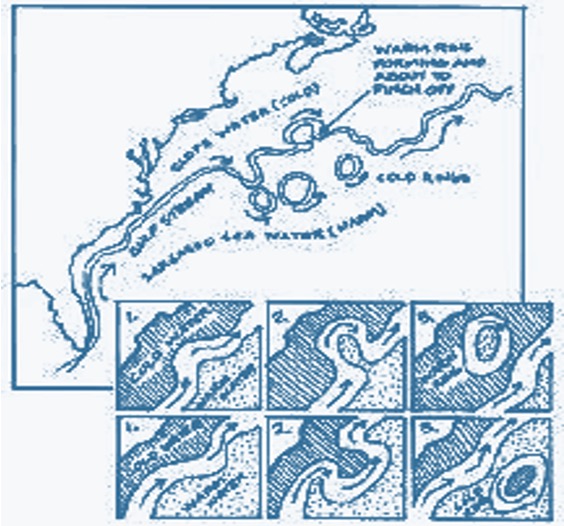 In 1948 Rossby published that jet stream meanders frequently increase in amplitude until troughs and ridges are cut off from the main current" A recent 2022 peer reviewed study illustrated just how the omega block evolved and enabled the record 2021 heat wave.

The column to the left shows how the jet stream evolved from a relatively straight west to east flow on June 22nd, a looping wave and an omega block by June 24th and by June 26th the loop was ready to cut off from the jet stream flow. 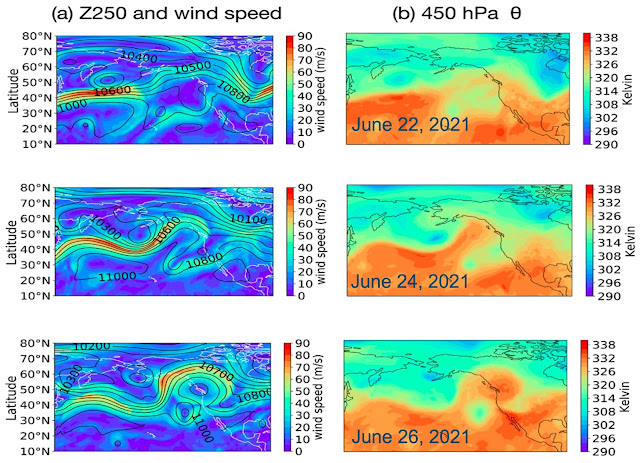 The column on the right shows how air temperatures changed, and the authors stated "an upper-level atmospheric blocking snatched a warm pool of air from lower latitudes”

El Nino’s can alter a jet stream's flow by warming the eastern Pacific’s surface temperatures. The increased convection also initiates a train of alternating high- and low-pressure systems that can amplify or reduce a jet stream's waviness elsewhere

It is likely that, decadal changes in the jet streams position are partially driven by changes in El Ninos and La Ninas

Elsewhere, Greenland’s heat waves and melting ice sheet coincides with a decreasing North Atlantic Oscillation, and an increasingly wavy jet stream, which caused a high-pressure system to sit over the ice sheet and increase solar heating. 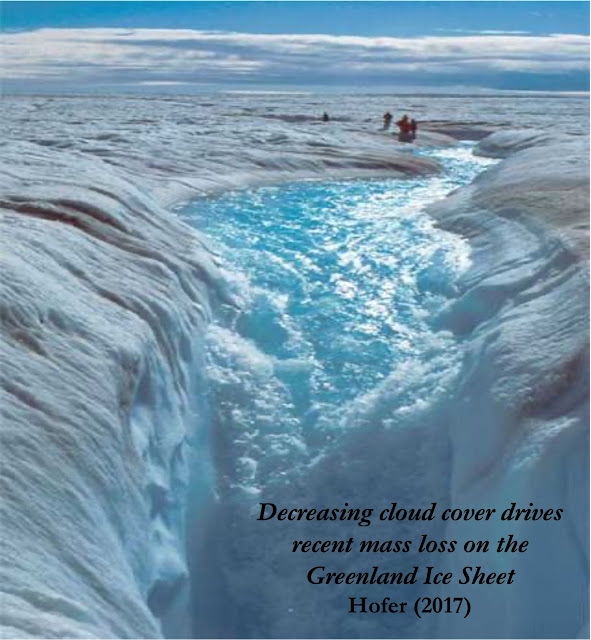 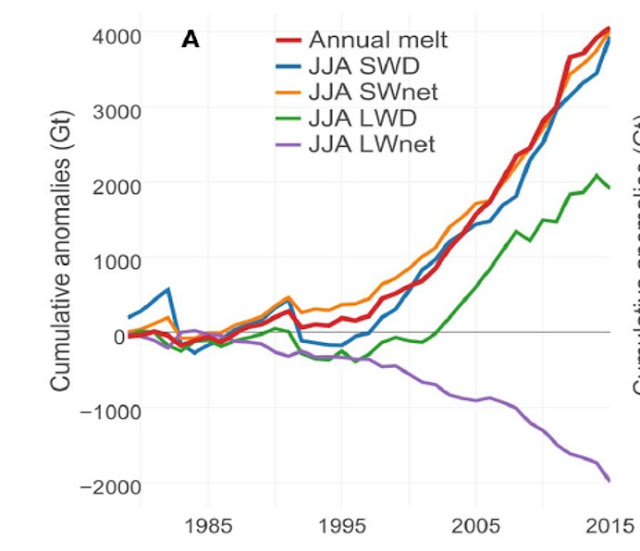 Although the increased solar heating increased the amount of longwave infrared, the lack of clouds caused a reduction in net greenhouse warming causing a steadily decreasing effect on ice sheet melting represented by the purple curve.

In 2015 scientist were confused when Greenland’s summer melt was unusually rapid only in the colder northwest region, while little melt was happening in the warmer southeast region. But a cutoff high explained that climate oddity

Here is the national weather services' global reconstruction of the upper atmosphere in summer 2015, with the jet streams shown in red. 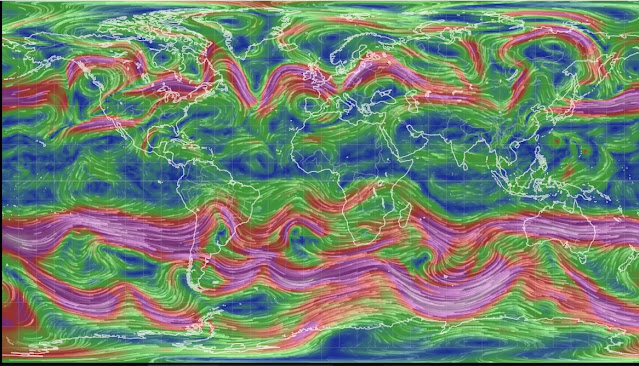 Notice in the northern hemisphere the jet’s wave is not as amplified as in the southern hemisphere despite reduced Arctic sea ice. Also notice that no jet stream ridge nor its high-pressure systems sit over Greenland during this time. 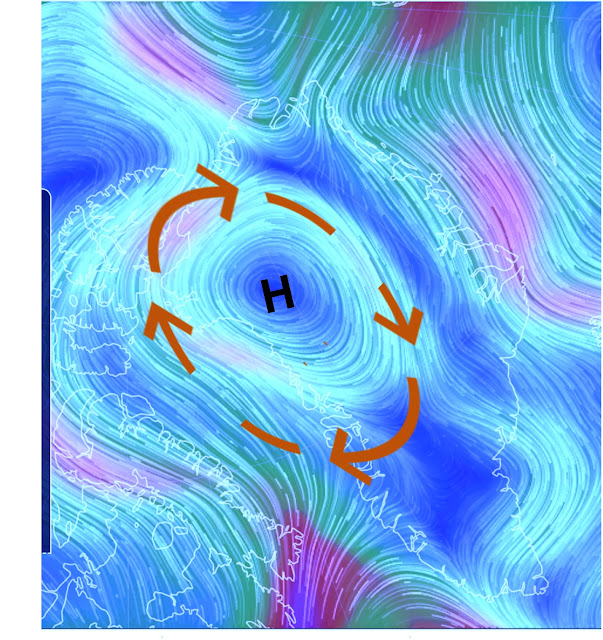 The extreme melting was the result of a cutoff high that had detached from the jet stream and moved northward. Free from being steered eastward by the jet, the cutoff high created a heat dome that remained over northwestern Greenland for many, many days

Also, in 2021, western Germany experienced extreme flooding in July driven by a jet stream's cutoff low. But again, the World Weather Attribution published the floods were made worse by CO2 global warming. And again, that claim was echoed by click-bait media and alarmist scientists. They all offered the same irrelevant narrative that in a warmer world, the air holds more moisture to produce extreme rainfall.

Cut off lows are called weatherman’s woes because it unpredictably causes extreme weather. Cut off lows form from the same naturally evolving fluid dynamics that cause cutoff highs and omega blocks

In this weather map, notice only at the center of the cut off low is there enough abundant moisture, indicated by the red color, to promote the heavy flooding. Despite claims of a global warming effect, all the surrounding regions contained below average atmospheric moisture. Extreme rainfall happened because the cutoff low remained in place for days, continuously concentrating moisture over the region. 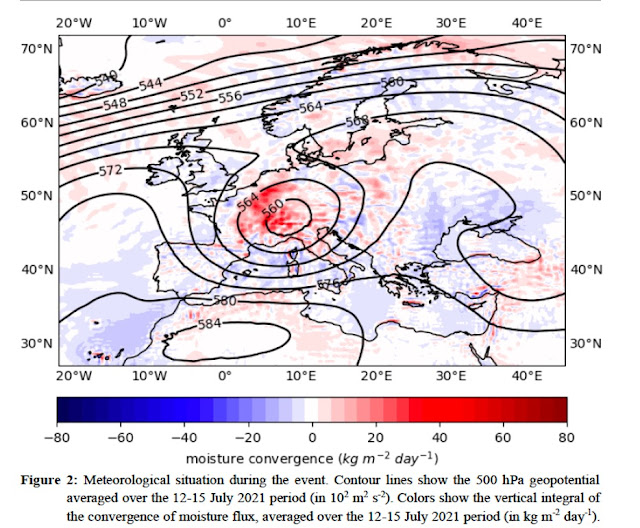 Cutoff lows are unusual events. But a 2008 scientific paper detailed how the geography of this region promotes 33% of all the global cutoff lows events

But cut off lows are not needed to bring unusually heavy rains. The flooding in Great Britain happened as the trough of the jet stream migrated southward causing a stormy low-pressure system to migrate over Great Britain And linger there due to an omega block over Scandinavia

Last year Scientific American published Harvey’s tabloid piece regards how climate change will shift the jet stream and tragically disrupt the world's weather. To her credit, she did note such claims were highly controversial with no consensus among scientists. However, she highlighted a 2021 paper by Osman and although the reconstructed evidence, as shown here, shows that for over a thousand years the jet stream has always been driven by natural variability, and despite the evidence that since the Little Ice Age, the jet stream’s natural variability has shown no trends related to rising CO2. 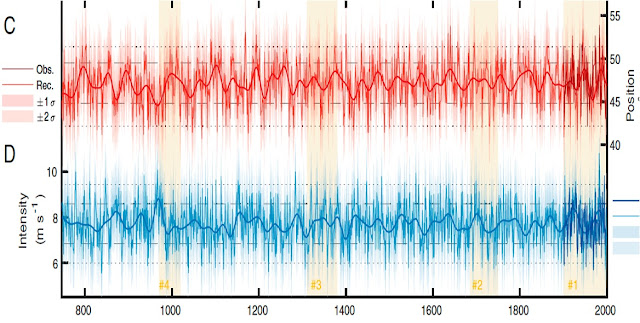 Still Osman, Harvey and the Scientific American all want the public to believe that in just 40 years further rising CO2 will suddenly overwhelm natural variations and push the jet stream unnaturally northward and disrupt our weather

Blaming humans and rising co2 for all the ills of the world and every natural weather change is a simplistic answer that corrupt politicians and alarmist scientists like Michael Mann push, and the click bait media thrives on.

Such simple narratives will only send a gullible public and public policy over a cliff. It obscures the complex climate interactions that so many other scientists have identified even though their work fails to capture media headlines. People who truly want to understand the science, they need to understand the natural complexities of climate change so we can enact the best policies

So up next: part 3 of the big 5 natural causes of climate change: La Nina and the Warming Ocean

Until then.... Embrace renowned scientist Thomas Huxley's advice: Skepticism is our highest duty and blind faith the one unpardonable sin