When Warming is Cooling!

published in the Pacifica Tribune, December 30, 2019

When Warming is Cooling! 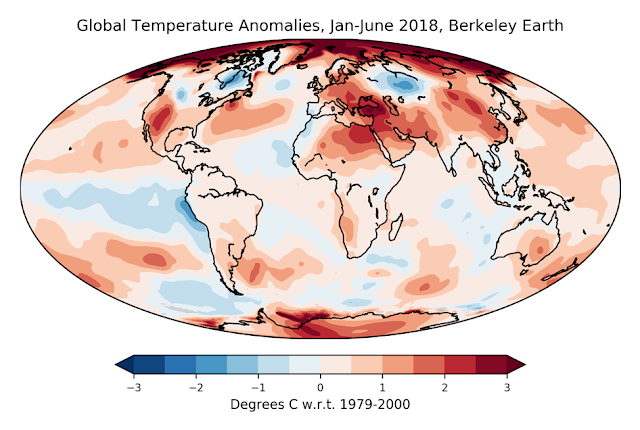 The media has been awash with doomsday headlines, trumpeting a human-caused “climate crisis” simply because the estimated average global temperature has risen about 1.7°F since the end of the cold Little Ice Age 150 years ago. However, the Arctic has been the greatest climate outlier and its much warmer temperatures, averaging 3.6°F higher than the 1951–1990 average, has shifted the global warming average upwards.

Furthermore, increased ventilation of stored ocean heat has contributed to much of the Arctic’s recent high temperatures. Ventilating heat warms the air but cools the ocean, and climate history reveals ventilating heat has caused several bouts of extreme warming. Over the past 100 thousand years Greenland’s ice cores recorded 24 extreme warming episodes when air temperatures suddenly rose 14°F - 28°F in a few decades or less. More recently over 4000 years in the Canadian Arctic, decades of rapid ice loss accompanied air temperatures 3°F -10°F warmer than today, quickly followed by centuries of more sea ice and colder temperatures. Although the physics of those dramatic warming events are still in play today, the good news is: warming climates minimize such dramatic warm events.

The climate dynamics responsible for these dramatic warm events is easily demonstrated, and a simple experiment might ease the troubled minds of students plagued with “climate crisis” anxiety. Heat a large covered pot of water. Measure the air temperature above the pot’s lid. If you don’t have a thermometer, simply hold your hand above the lid. Then remove the lid and feel the escaping heat. In a similar fashion, Arctic sea ice (and a surface layer of fresher water) act like the pot’s lid. Remove the ice and the air dramatically warms. Conversely, extensive ice-cover will cool the air but warm the underlying ocean.

Ocean currents constantly transport tropical heat towards the poles, making Arctic climates far warmer than possible if only the sun and greenhouse gases controlled the Arctic’s climate. Warm dense “Atlantic water” constantly enters the Arctic Ocean. Some heat ventilates but some is stored at intermediate depths. Currently there is enough stored heat to melt sea ice many times over. The extensive sea ice of the last Ice Age insulated the Arctic Ocean causing heat to increasingly accumulate. Eventually that great store of heat melted sea ice from below, allowing heat to vent and greatly warm the atmosphere.

The same dynamics triggering past Dansgaard-Oeschger events provide insight into today’s Arctic warming. During the 1970s and 80s, measurements over an ice covered Arctic recorded cooling air temperatures prompting researchers to publish, “Absence of Evidence For Greenhouse Warming Over the Arctic Ocean In the Past 40 Years.” Those cooling air temperatures did not reduce modern Arctic sea ice. But other factors did.

Arctic winds can trap ice in the Arctic causing ice to thicken. However when the winds shift, thick sea ice will be blown out and melt in warmer Atlantic waters. The resulting open water and thinner ice allows more Arctic subsurface heat to ventilate. In addition to wind-driven ice loss, satellites reveal the greatest area of open Arctic waters corresponds to the pathway where warm dense tropical waters, via a branch from the Gulf Stream, enter the Arctic and melt sea ice from below. It is now widely believed high inflows of warm Atlantic water helped to melt sea ice and trigger the Dansgaard-Oeschger warm events, just as oscillating warm inflows now melt Arctic sea ice today.

A new monitoring system established off the coast of southern Florida in 2002, reports warm water increasingly flowed towards the Arctic until 2008, but since then warm inflows have been decreasing. So, we will now witness a natural experiment that tests competing climate hypotheses. If the increasing inflows of warm water caused most of the Arctic’s recent sea ice loss, then reduced flows should allow sea ice to recover within another decade. In contrast, the competing hypothesis is warming from increasing CO2 concentrations will cause an ice-free Arctic Ocean. Early predictions of an ice-free Arctic have already failed. But many still predict an ice-free Arctic by 2030 or 2050. Of greater interest, if sea ice does recover, will the reduction of Arctic heat ventilating to the atmosphere, also reduce global temperatures and avert the ballyhooed “climate crisis”?