Below is the transcription of the video 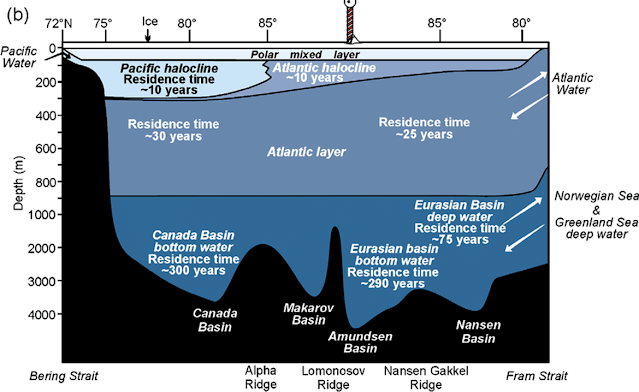 Today, I'm looking at part two,  how sea ice controls the ventilation of heat from the Arctic ocean and the Arctic's air temperatures.

Now there are three major factors affecting sea ice extent and thus Arctic temperatures. The first, as detailed in part one, the volume of inflowing warm Atlantic water into the Arctic has correlated with sea ice extent for decades and millennia. The warm inflow circulates inside the Arctic for 25 to 30 years and peer reviewed studies such as Polyakov (2017) have determined there is currently enough heat flowing into the Arctic to completely melt all the sea ice. 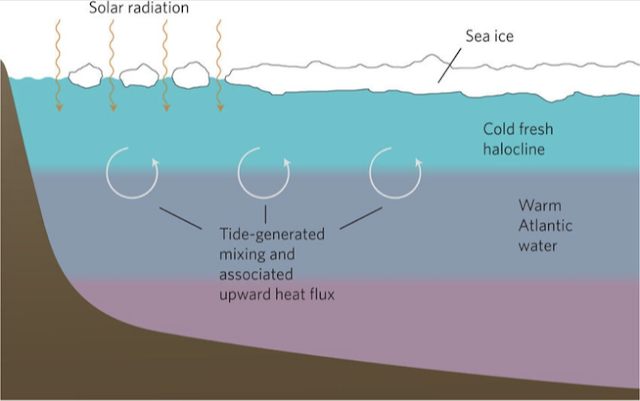 The warm inflows create a warm subsurface Atlantic water between about 150 and 900 meters.

As the Atlantic water circulates around the Arctic heat ventilates from the open water and the thinner ice, and warms the air while it is cooling to about 0.4 degrees centigrade; still warm enough to have melt sea ice. However, regions with thick multi-year sea ice will insulate Atlantic water heat from radiating back to the atmosphere. Now the 3 degrees of inflowing heat through the Fram Strait thins the sea ice along its Eurasian coast pathway. But as the heat ventilates into the atmosphere, the inflowing water cools to 0.4 degrees centigrade. So sea ice in the Central and Western Arctic tends to be thicker than in the Eastern Arctic. 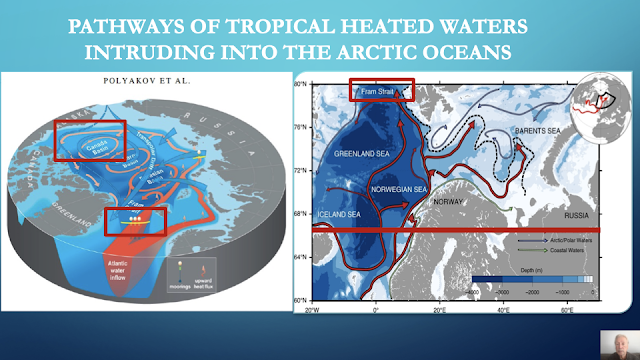 But before that 3 degrees centigrade Atlantic water reaches the Fram strait,  water entering the Arctic circle (designated by this red line) is much warmer and has been keeping most of the Greenland, Norwegian and Barents eSeas free of winter ice. Now, the effects of thicker sea icce explains the results of a peer reviewed paper published in 1993 in the esteemed scientific journal Nature. Researchers measuring air temperatures over Western and central Arctic ice, found no warming over a period of 40 years and even a slight cooling.

So they reported no evidence of any greenhouse warming.

The effect of sea ice on Arctic temperature is more dramatically exhibited by the  Dansgaard-Oeschger events.

Between our current warm interglacial and the previous warm inter-glacial, there is the cold 100,000+ year glacial period. A closer look at that glacial period reveals over 20 rapid warming Dansgaard-Oeschger events, during which air temperature rose by an incredible 5 to 15 degrees centigrade or 9 to 27 Fahrenheit in just a few decades. 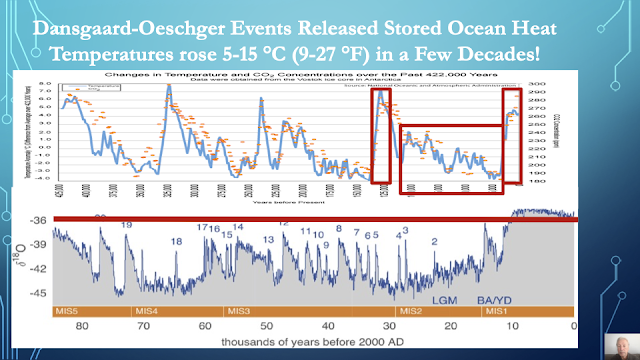 And despite a heavily glaciated Northern hemisphere, temperatures were almost as warm as the final warm event that led to the present warm into glacial.

Now there are several hypotheses, all of which may be in play explaining why se ice suddenly released ocean heat to produce those warm Dansgaard-Oeschger events. Some hypothesize that these warm events were caused by an increase in warm water inflows.

Other suggests because thicker ice was preventing heat from ventilating as their temperatures cooled, sub surface temperatures increased to the point it melted the ice.

And also as the glaciers grew covering the land from Chicago to Boston, with ice a half a mile thick,  sea level fell creating the Bering Strait land bridge that allowed humans to migrate from Asia to north America, but it also lowered sea level and blocked the inflow of fresher Pacific water. 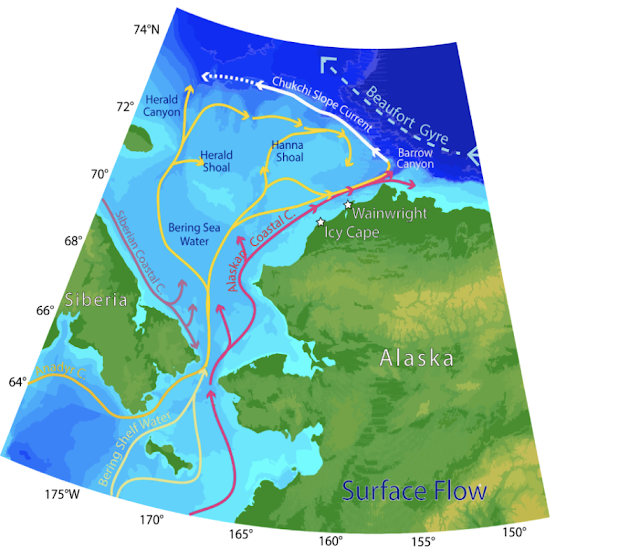 And without the insulating layer of Pacific water, the warm Atlantic water had a greater direct contact with sea ice, which was then melted more readily.

In our present interglacial, sea ice grows each winter and then it melts each summer.

But typically only the thin first year sea ice represented by the purple color is lost, allowing heat to ventilate. The following winter, summer's open water is covered again by the new ice. 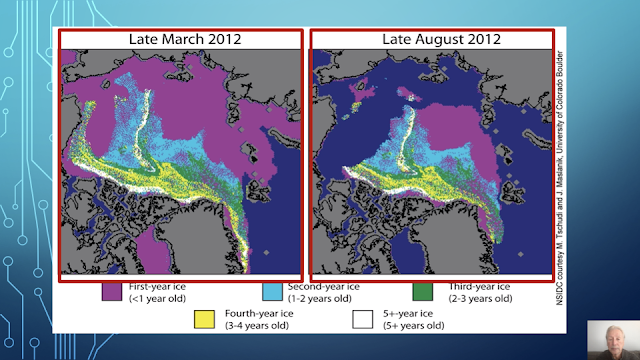 Thick multi-year sea ice only grows where slabs of ice pile on top of one another, especially where ice slabs are pushed against the Northern Greenland coast or the Canadian Islands as represented by non purple colors. That is where the thickest four-year-old and older ice is maintained. And the bulk of that multi-year ice large is largely unaffected between winter and summer temperatures. However, the amount of thick ice can be greatly altered by the winds of the natural Arctic oscillation, which varies on timescales from weeks to decades to millennia

Peer reviewed science by Ignatius Rigor determined that in 1989, the positive phase of the Arctic oscillation became more dominant and removed thick multi-year ice from the Arctic allowing more heat to ventilate from the subsurface causing the recent rapid Arctic warming. 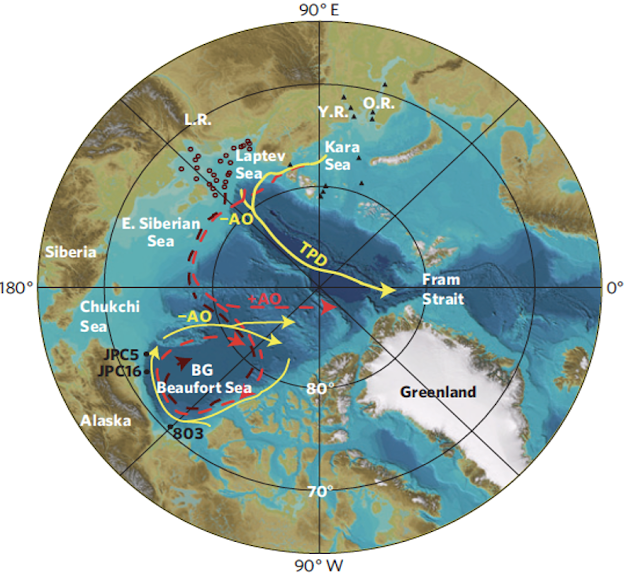 Now previously in the 1970s and eighties, when the negative phase dominated winds, trapped sea ice inside the Beaufort Gyre, seen in the lower yellow curve, increasing the amount of colliding and overlapping ice.

Along the Eurasian coast, the cold Siberian winds guided the Transpolar Drift (TPD) the upper yellow curve, which primarily carried just thin first-year ice out of the Arctic through the Fram straight to melt in the Atlantic

The 1989 switch to the positive phase caused a Transpolar Drift to dive deep into the center of the Arctic. Following the path of the red curve seen here and then drove increasing amounts of thick multi-year sea ice out of the Arctic into the Atlantic, through the Fram Strait.

Ocean and atmospheric circulation are clearly the critical climate dynamics, controlling sea ice, heat ventilation, and Arctic warming. But those dynamics are the elephants in the room, rarely addressed by a mainstream media bent on pushing clickbait, driven by climate crisis headlines. 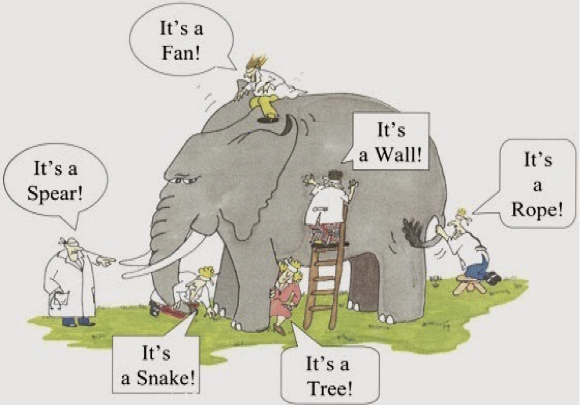 The release of heat from the surface is largely mediated by sea ice thickness. The varying winds driven by the Arctic oscillation can either trap and grow thick ice or remove thick ice

And although it's true, more ventilation made available more heat available to be recycled via the greenhouse effect, that dynamic is relatively insignificant. Rising CO2 attribution is the media's way of having the tail wag the elephant.

Ocean and atmospheric circulation are by far the most significant drivers of sea ice changes and Arctic warming.

I emphasize again,  ocean and atmospheric circulation are the most significant drivers of the so-called Arctic amplification.

Up next In part three, I'll examine how the sun affects the amount of warm tropical waters flowing into the Arctic.

And until then embrace Thomas Huxley's advice "That skepticism is the highest of duties and blind faith, the one unpardonable sin."

And if you appreciate the science clearly presented here, science rarely presented by mainstream media.

Then please give it a, like, give it a share or copy the URL of the video and email it to friends, subscribe to my channel or read my book, landscapes and cycles and environmentalist journey to climate skepticism.