Greenland and the 1950s Climate Consensus

Glaciers around the world reached their greatest size in four thousand years by 1850. Then abruptly the world began to warm. Arctic sea ice lost 40% of its thickness by 1940. Around the Arctic island of Spitsbergen melting sea ice allowed shipping season to lengthen from 3 months to 7 by 1940, meanwhile 400 additional square miles of sea ice was melting along the Russian coasts. By 1950, 96% of Europe’s glaciers were retreating and small glaciers had simply disappeared. In the tropics, Africa’s Kilimanjaro’s iconic glaciers were also shrinking alarmingly.

In the far north, pine forests couldn’t reproduce between 1850 and 1900 due to the cold. But with warming, all age classes of seedlings proliferated. Tree-line rose by about 70 feet in a few decades. Plants were flowering earlier, and seeds and berries ripened earlier. Atlantic cod moved northward creating a new Greenland fishery and several southern bird species moved into Iceland. 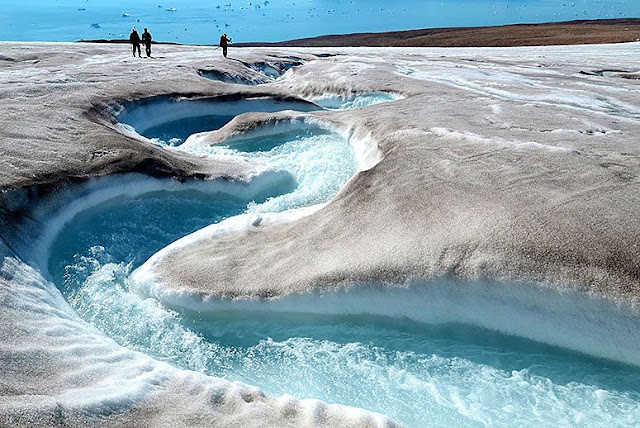 This warmth was an extraordinary climate reversal and scientists sought to understand that change. By the 1950s a foremost glacier expert, H.W. Ahlmann, stated the growing consensus the dramatic warming was due to “an increased transfer of heat through the atmosphere by a strengthening of the winds carrying heat from southern parts to the Arctic."  Today’s top climate scientists are observing similar natural climate change that pushes warm winds and warm ocean currents northward, melting the Arctic once again.

Today there is growing scientific support for the theories that changing winds cause decades of warming or cooling in the Arctic. One measure of naturally shifting winds is called the North Atlantic Oscillation (NAO) index. The NAO alternates between a positive phase in which westerly winds increase, bringing warmer winters to western Europe. Switching to its negative phase, the westerly winds decline causing western Europe to cool, but that phase also causes warmer winds to blow from south to north more frequently.  Scientists admit that as much as 100% of observed climate change could be due to that natural variability.

As political battles over who controls energy policies intensified, interest in fossil fuels and CO2-global warming theory was revived. Scientists promoting CO2-global warming exhumed Callendar’s private papers and elevated his status to a founding hero of global warming theory. A few scientists believed that rising CO2 could affect the winds and the phase of the NAO. Because the  positive NAO had produced strong westerly winds that warmed much of Europe and Asia, they predicted the current positive NAO would continue and further intensify global warming.

But that hypothesis failed quickly. The NAO reversed to its negative phase as the 21st century began. That caused westerly winds to weaken. That produced more persistent blocking high pressure systems and a wavier jet stream as seen in the diagram.  Blocking weather systems are slower moving than normal storms and force the prevailing winds and other storms to move around them. This was outlined, again, in the 1950s by climate scientists who pioneered our present understanding of blocking systems. Weather satellites now confirm those weather effects. They also showed when early 20th century blocking systems forced warm air from the south to pass over Greenland, surface temperatures rose 10° to 12°C above normal. 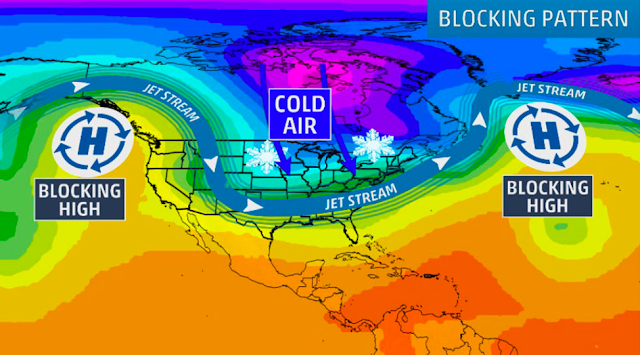 In the diagram orange colors are warmer and blue colors are cooler. Blocking systems in the Pacific push warmer air (orange) into Alaska and draw cold air into the southern USA. Thus, Alaskan temperatures are sometimes higher than northern Florida. Likewise, blocking in the Atlantic pushed warm air over Greenland causing extreme melting but brought a cold snap to Europe. Americans became aware of the power of a negative NAO and blocking when a weak hurricane was prevented from normally moving out to sea. Instead it was diverted into New Jersey, transforming into the devastating Superstorm Sandy. In 2019, a warm air mass from the baking Sahara Desert moved northward. Crossing Europe, the Saharan air brought record high temperatures. Continuing northward, that warm air then caused Greenland’s 7th greatest period of melting since 1978.

The theory that the NAO and shifting winds create the conditions that drive Greenland’s warming and cooling is supported by all observable evidence. Greenland lost ice in the 1930s then gained ice in the 1970s and 80s. Although Greenland’s ice has been melting extensively in recent decades, that melt rate is now slowing and the shifting NAO suggests the ice will rebound. In contrast, the competing CO2-global warming theory suggests as CO2 continues to rise, Greenland’s ice will increasingly melt and dramatically raise sea levels. That theory has prompted calls to abandon our coastlines and invest in managed retreat. But before you panic, know your climate history and listen to the science. All the science!