SCIENCE OF SNOWFALL AND CLIMATE SNOWJOBS

Below  is the trancript to the video
SCIENCE OF  SNOWFALL AND CLIMATE SNOWJOBS
at https://youtu.be/g8udmYbXiOI 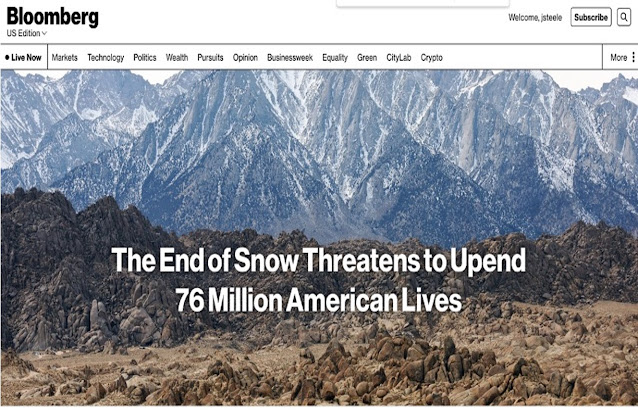 This video addresses another atrocious media claim, this time by Bloomberg Green, that very soon there will be an end to snow. This fear mongering has been pushed for over a decade now.

In 2000, Dr. David Viner, the senior research scientist at the Climatic Research Unit of the University of East Anglia, predicted within a few years winter snowfall will become “a very rare and exciting event”. “Children just aren’t going to know what snow is”.

But a quick review should show why such fear mongering is not supported by the science of snowfall.

Bloomberg's journalists clearly do not understand the difference between natural weather oscillations and climate change. They compared the Sierra Nevada’s heavy snowfall in 2019 with low snowfall in 2022 as evidence of a declining trend in snowfall.

But they NEVER addressed the well-known effects of El Nino and the Pacific Decadal Oscillation that cause such variations. 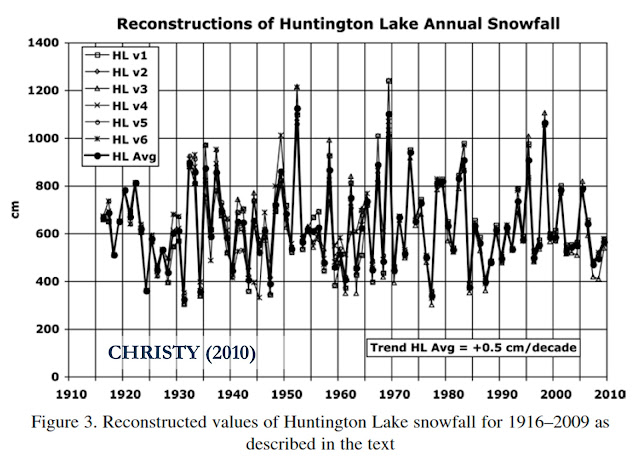 Studies detailing 3-fold changes in Sierra Nevada snowfall over the years have been published, such as Christy’s 2010 research paper.

By ignoring a wealth of snowfall science, Bloomberg’s so-called journalists will be better known for their ridiculous end of snow predictions. 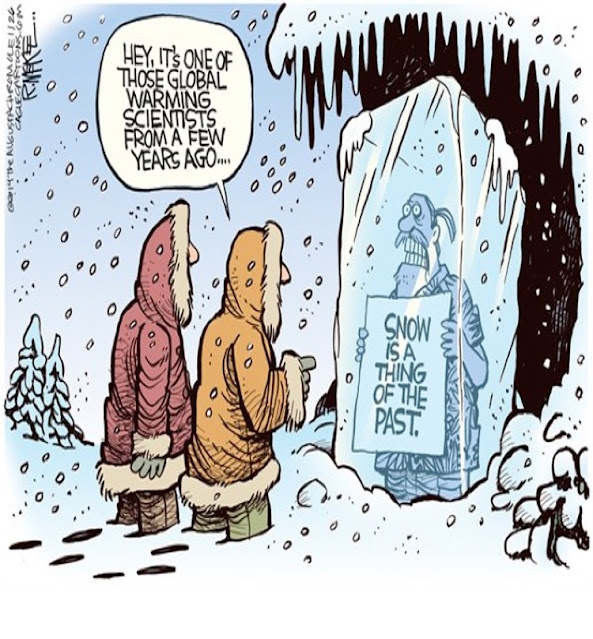 Both the media and alarmist scientists are guilty of cherry-picking just the decline in springtime snow extent to push their end of snow fears. But during the winter, snowfall has increased And autumn snowfall has also increased. 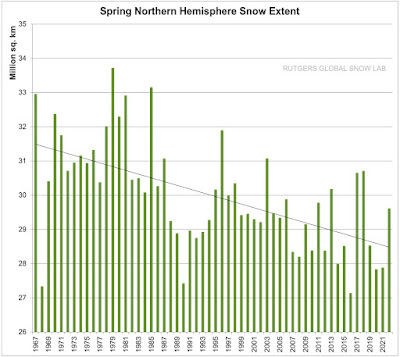 Regions that cover less than 6% of northern hemisphere explain 62%–92% of the interannual variance across the continents.

Snow will change in most places as the climate continues to warm, but exactly how and why, may be among the most challenging questions about weather and climate change

So, ignore the doomsayers! Let's quickly examine why there are indeed “no easy answers”

As temperatures fall, significant snowfall happens each winter in the northern two thirds of the United States. The locations illustrated here in red experience the heaviest snowfall and are governed by very different moisture transport dynamics, prohibiting any one size fits all analysis of changes in global snowfall. 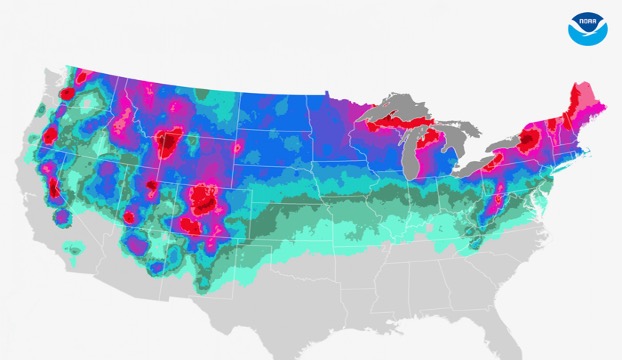 First remember what every elementary school child is told; no two snowflakes are the same. That may not be entirely true, but it speaks to the varying conditions of temperature and moisture that control snowflake formation, creating a huge spectrum of differing snowflake crystals that produce different snowpacks, from heavy wet snow to dry powdery snow. 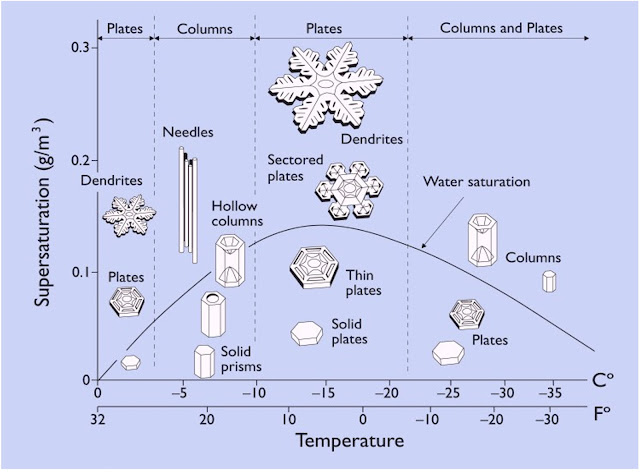 So, it could also be argued no two snowpacks are exactly alike. The density and thus water content of snowpacks can vary 3-fold. Depending on when the snow falls the snowpack can become denser over time.so simply measuring the extent of snow cover from satellites, fails to determine how much water fell as snow So, scientists use snow water equivalent measurements, but those measurements require time consuming efforts and thus provide a very limited sample size of snow conditions. 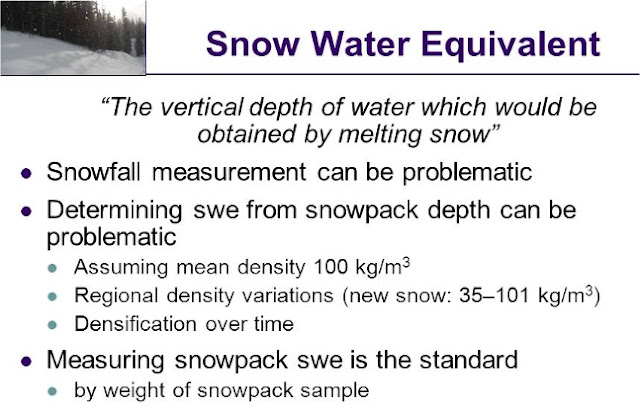 Still, we do know that El Nino cycles and the Pacific Decadal Oscillation have very significant impacts on the snow water equivalent. Thus, the effects of natural oscillations must be considered for any analysis of snowfall trends.

Temperature and moisture have opposing effects on snowfall. As temperatures decrease to the point where snowflakes can form and reach the ground, the amount of moisture in the air decreases reducing the amount of snow

The northern hemisphere's latitudes with greatest snowfall are also regions with the lowest winter atmospheric moisture.

Predictions that global warming will melt more snow, suggest the biggest declines in snow extent will happen at the relatively warmer southerly edge of the northern hemisphere's snow extent.

But as surveyed by Kunkle 2016, the pattern of decreasing and increasing snowfall does not fit global warming expectations, again suggesting that varied dynamics of moisture transport are the key to understanding snowfall variations.

Furthermore, many studies unscientifically simply assume a global average temperature affects all regions equally. But as illustrated by Cohen 2014, much of the mid latitudes have experienced winter cooling for the past 2 decades.

And in contrast to global warming hypotheses, despite cooling over most of Eurasia, that region has experienced less snowfall.

Warmer air holds more moisture. And it is the transport of that moisture to cooler regions that provides enough water vapor for significant snowfall.

If warm air at 20 degrees Celsius is cooled to the freezing point, it will precipitate over 60% of its moisture. Typically, atmospheric rivers bringing moisture from the warm tropics will dump the most snow when making landfall further northward.

In contrast, because cold arctic air masses averaging minus 10 to 30 degrees Celsius, that cold air hold insignificant amounts of moisture, and cannot bring significant snowfall directly to the regions it passes over.

Nonetheless that cold air can cause warm air water vapor to precipitate as snow. 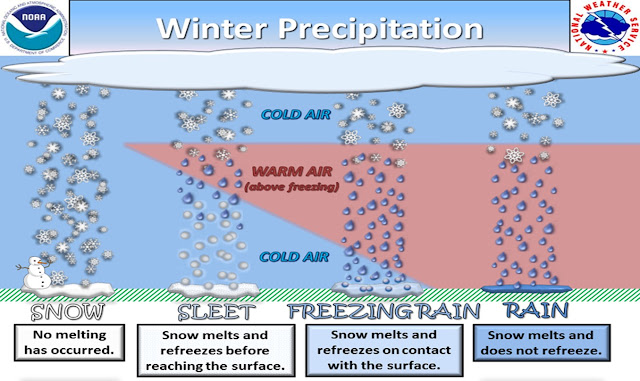 Typically, all moisture at higher altitudes forms snow, but if it descends through a warmer air mass, it turns to rain.

If that rain then falls through a colder air mass nearer the ground it forms sleet or freezing surface rain.

By preventing melt, snow accumulation only happens where the air is cold enough all the way to the surface.

At weather fronts, cold air will force warm moist air to rise to altitudes where temperatures are cold enough to initiate snowflake formations

As storms move across the land, the counter-clockwise motion of the winds pulls cold air down from the north to interact with warm moist air being drawn northward.

However, studies find that although storm track latitudes have varied over the past 300 years there is no apparent trend as expected from global warming theories.

Mountains have a tremendous effect on snowfall. Moist air forced upslope to cooler altitudes is the reason the greatest snowfall in the United States is found in mountainous regions. 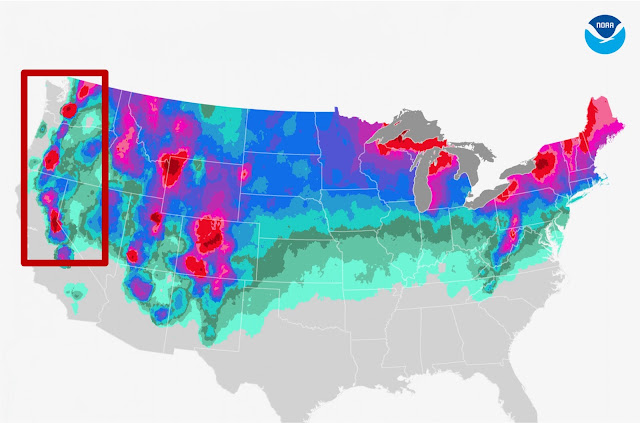 The amount of snow is governed by El Nino cycles. El Nino brings warm moist air to the southern USA. Accordingly, studies such as Lute 2014 have detailed how El Nino years bring high snowfalls to the Sierra Nevada, but reduced snowfall to the Pacific northwest.

A swing to La Nina-like conditions brings dryness to California and the southern United States. The reduced Sierra Nevada snowfall of 2022, and fear mongered by Bloomberg’s “ End of Snow” click bait atrocity, was the result of reduced moisture transport associated with current La Nina conditions and a negative Pacific Decadal Oscillation.

Other studies have shown oscillating years of much more vs much less snowfall in the Sierra Nevada for the last seven decades.

In the northern Sierra Nevada, there was an insignificant decreasing trend.

But an insignificant increasing trend in the southern Sierra Nevada

And at low elevations in the southern Sierra Nevada where global warming hypotheses expect the greatest loss of snow, there has been an insignificant increase in snowfall

The heavy snowfall in the Rocky Mountains is also partially determined by El Nino cycles. However, the moisture carried from the pacific by westerly winds during the winter loses much of that moisture before reaching Colorado, resulting in the dry powdery snow that is so favored by skiers.

But that changes in the spring!

A low-pressure system settles in during the spring causing easterly winds to carry moisture from the Gulf of Mexico westward. These dynamics deliver wetter snow and as much if not more snow than falls during the winter.

Despite the lack of mountains, the midwestern USA experiences heavy snowfall from lake-effect snow. Cold dry Arctic air will absorb copious moisture as it passes over the relatively warmer great lakes and then dumps it inland. 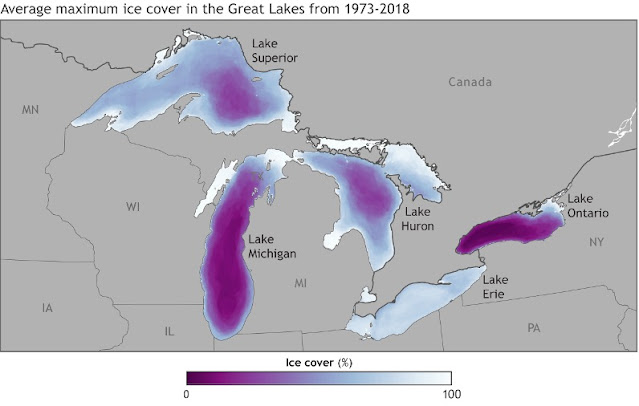 They attributed the increase in lake effect snow to declines in ice cover caused by global warming. But that is inaccurate and not very truthful for a government sponsored scientific study.

It has been well established that lake effect snow is governed by many variables: Besides ice cover, wind speed and wind direction have major impacts. When the winds blow along the long axis of a lake more moisture is absorbed, and greater snowfall occurs.

Indeed, ice cover does have a major effect, however only lake eerie ever completely freezes each year, while most of the deeper lakes maintain large areas of open water illustrated here by dark purple colors.

Although ice cover declined as NOAA noted from 1975 to 2000. Ice cover then increased from 2000 onward, contrary to global warming predictions of declining ice cover. 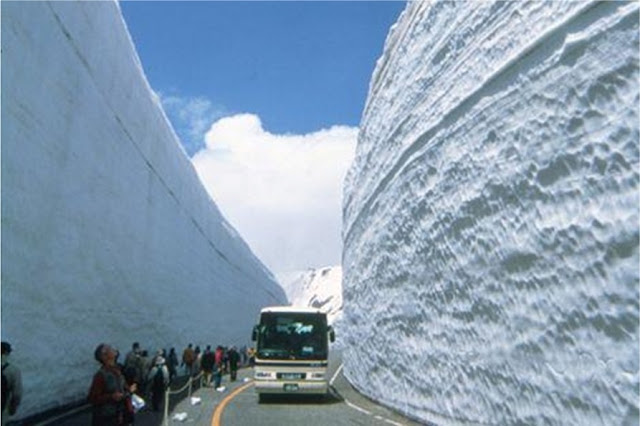 The strength and direction of those winds changes as the high-pressure system over Siberia varies.

The strength and location of the Aleutian low pressure system, which is altered by El Nino cycles and the Pacific Decadal oscillation, also alters the pressure gradient which controls the strength and direction of the winds and thus the amount of sea-effect snow accumulation. 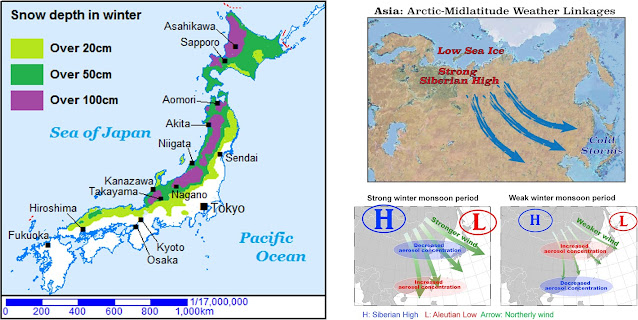 Due to such variability, Japan’s local snow accumulation has exhibited no trend in one location,

increasing snowfall trends in others,

and decreasing trends in still others. 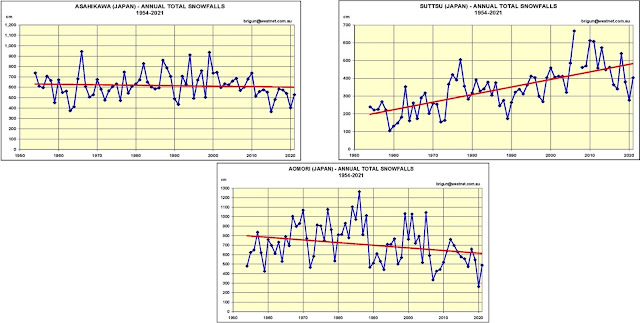 The last region in the United States of high snowfall is in the northeast.Moisture from the Atlantic is delivered via winter storms known as "nor-easters" and dumped in the higher elevations of the Green or White Mountains further inland.

Snowfall here is largely governed by moisture transport that varies with the Atlantic Multidecadal Oscillation and the North Atlantic Oscillation.

The related Arctic Oscillation determines where and how much cold Arctic air moves southward to interact with relatively warm moist air flowing from the Atlantic.

The many possible interactions amongst the natural oscillations, described in this video, have huge effects on moisture transport and thus snow accumulation.

So snowpacks will naturally ebb and flow accordingly.

So don’t believe the doomsayers. The science has yet to support their fear mongering.

And don’t hesitate to buy your children winter sports equipment. There will be plenty of snow most years for them to enjoy.

And I am so confident of the science of snowfall, that I promise to reimburse everyone's winter sports expenditures, if "the end of snow", ever really happens in our lifetimes!

Posted by Jim Steele at 7:38 PM No comments: