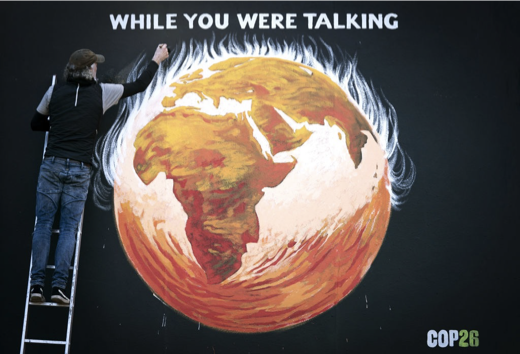 Welcome back!  This video examines the dishonest misinformation regarding sea level rise.

Just a small example of that fear-mongering, we see graphics portraying a flaming earth with red oceans

As expected media outlets like CNN have been busy generating computer fantasies of flooded cultural icons. 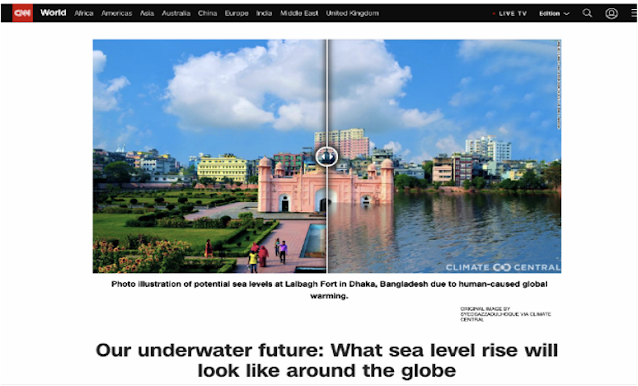 The Grist warns that California's coast will be inundated by 10 feet of sea level rise by 2100. 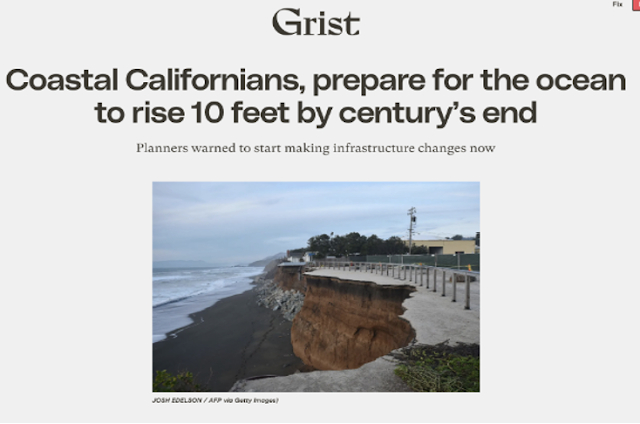 California's powerful Coastal Commission just released another requirement, demanding any adaptation actions must plan for three and a half feet of sea level rise.over the next 30 years 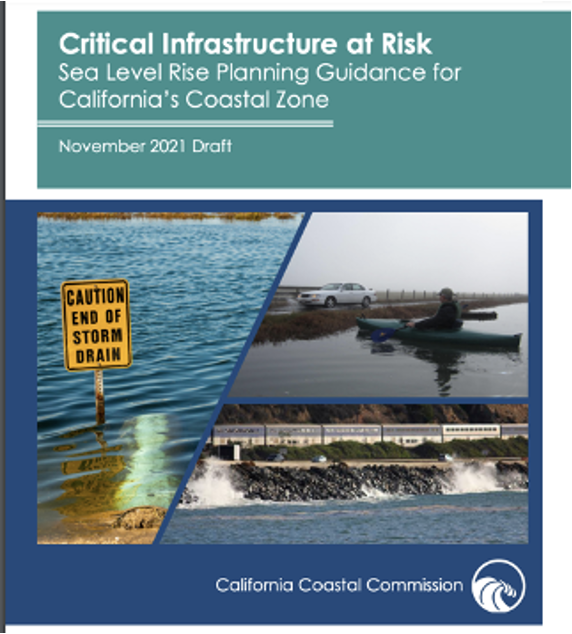 I served on the city of Pacific's Sea Level Rise Community Working Group, and such dishonest, fearful predictions by the Commission, disguised as "the best available science" only divided our city. Many people so overcome with blind panic, they argued we abandon the coast, abandon coastal homes and businesses, and rip-up infrastructure and move it inland.

Now, just recently, the coastal commission denied a beach front RV park in Pacifica from protecting its coastal bluffs from erosion, which will ultimately force the business to be abandoned. 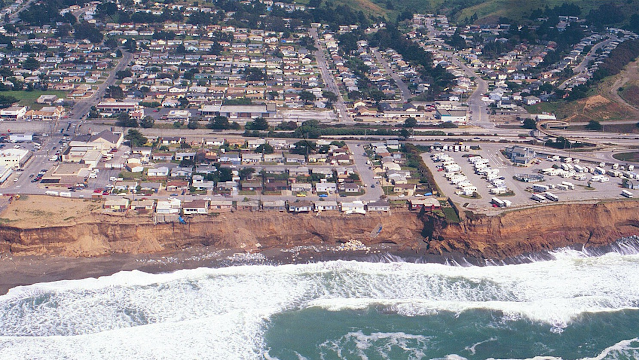 The tide gauge at the city of LA Jolla, California is one of the tide gauges used by the Commission's report. Based on predicted effects from rising CO2, they warned that sea level at La Jolla will rise at a rate of 5.1 millimeters per year by 2030 and by 9.6 millimeters per year by 2050. Meaning that sea level must accelerate two and a half to four and a half times the current rate of relative sea level rise.

In contrast, I urge you all to follow the science

Because the science reveals that they are either ignorant of sea level science or just liars. 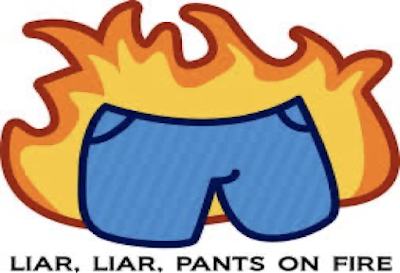 Now this includes the department of defense. In October, 2021, the DOD released this Climate Risk Analysis that was mandated by president Biden's January executive order 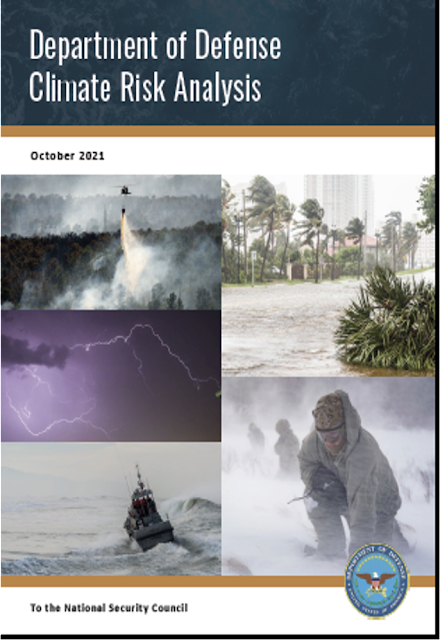 Lloyd Austin. The secretary of defense, who has no background in climate science has been reduced to a climate crisis mouthpiece writing,  "To keep the nation secure, we must tackle the existential threat of climate change,"

But as demonstrated in the previous video, the DOD's risk analysis  was pure propaganda! Adding absolutely nothing to what the military has already been doing to protect Americans from extreme weather for the past hundred years.

Kathleen Hicks, the new undersecretary to defense was given the mission to promote the DOD's climate analysis. And in her National Public Radio interview, although apparently she's ignorant of all the published sea level science, she warned "Pacific Island nations are now in an existential crisis and they may go underwater

National Public Radio NPR) has also become the sock puppet for the climate crisis agenda.  Their mission is to mindlessly state, ad nauseum, that every bad weather event, every problem was made worse by climate change. 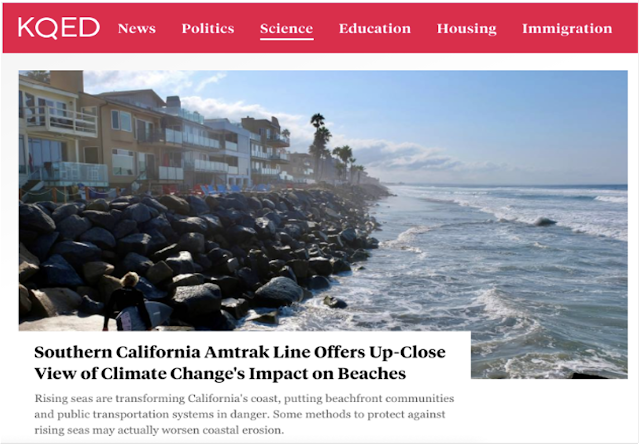 As expected during cop 26, they broadcast a piece stating rising seas are putting beachfront communities and public transportation in danger due to climate change. NPR's California Report just dishonestly attributed beach erosion to climate change without any further investigation, 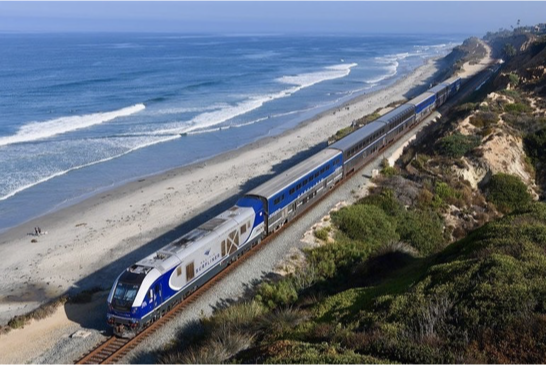 Stating Amtrak had to suspended service in Southern California, from Orange to San Diego counties for a few weeks, to make emergency repairs,  you guessed it, due to climate change.

So let's do good science and investigate this further.

Here is a map from the PSMSL, the Permanent Seervice of Mean Sea Level. It shows the location of the La Jolla tide gauge, just north of San Diego along the Amtrak route

NOAA's website, using data from PSMSL shows relative sea level at La Jolla has riseen just 2.14 millimeters per year, but by eye-balling the graph, the rate of rise appears to have slowed down in the last 40 years.

A similar relative trend and slow down is observed up the coast at San Francisco's tide gauge.

Furthermore scientific evidence reveals that the absolute sea level rise,  that's the rise due to expanding ocean water from climate change, is only 0.15 millimeters per year. Suggesting due to climate change, sea level would only rise by one inch in 160 years

First, to determine if sea level was indeed slowing down, I downloaded the monthly data from PSMSL website onto an Excel spreadsheet. Quite similar to NOAA. I calculated a relative sea level rise of 2.14 millimeters per year, from 1925 to 2021. 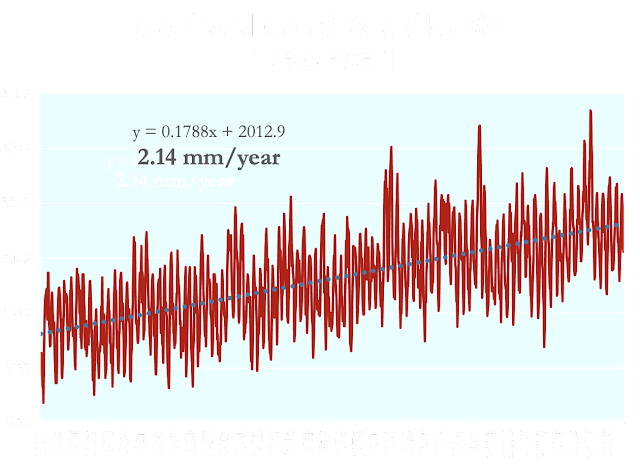 Now I recommend everyone visit the PS MSL site to retrieve such data, so you too can follow the science and evaluate the media C-level narratives.

I then graphed the same data, but with a starting date of 1980.  And indeed in contrast to climate change predictions of an accelerated sea level rise, the rate had slowed to 1.85 millimeters per year. 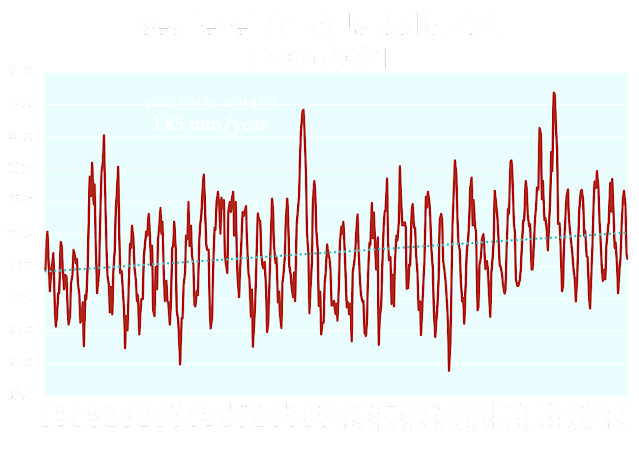 And furthermore, all the fearful narratives have ignored subsidence effects. And due to either ignorance or dishonesty, they all have failed to present the public with the rate of ABSOLUTE sea level rise.

Now to determine climate effects, only the Absolute rate of rise, not the Relative tide gauge rate, is relevant.

Thus to find the Absolute rate of rise, any vertical land motion around a tide gauge must be accounted for, Otherwise, wherever the land is sinking or subsiding,  relative sea level rise will be exaggerated and then falsely attributed to greenhouse warming by the media.

The advent of the satellite era and global positioning systems has been a game changer for sea level science.  GPS systems will allow the absolute sea level to be robustly determined. Unfortunately, there are still many tide gauges that lack co-located GPS systems or,  adequate long-term data. But best estimates will be determined. And some are now available from the SONEL.org website, a site you should also visit. 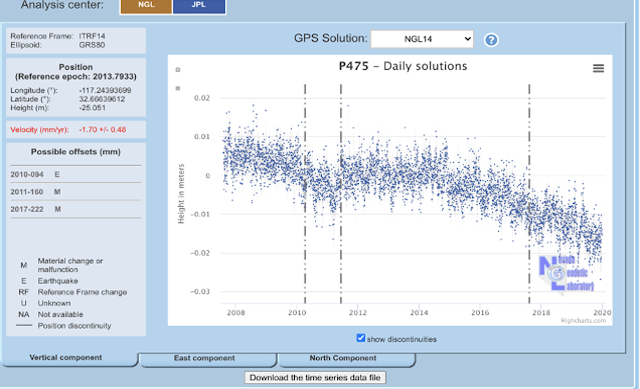 A GPS site near the LA Jolla tide gauge has been active since 2007, and has detected a rate of sinking land of 1.7 millimeters per year. To calculate absolute rate of sea level rise. We subtract that rate of subsidence from the tide gauge rate. The absolute rate of rise computes to just 0.15 millimeters per year. That's the rise due to climate change;  or ......one inch in 169 years.

It is thus dishonest, or simply bad journalism, for NPR to suggest the threat to Amtrak from beach erosion was due to rising CO2.

Now other scientists are doing similar calculations as I have done here for La Jolla. Beretta published a 2020 peer reviewed paper, examining five long-term tide gauges with a hundred plus years of data in Oceania: two from Australia. two from New Zealand and one from Hawaii. 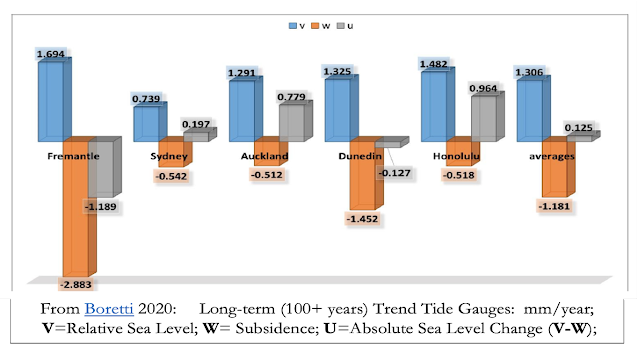 That average was 1.306 millimeters per year.

The orange bars represent the rate of subsidence.

The gray bars represent sea level's absolute rate,  by subtracting subsidence rates from the tide gauge rates. The average absolute rate of rise was just 0.125 millimeters per year, a hair lower than the 0.15 rate at La Jolla.

At COP26, Simon Kofi, representing the island nation of Tuvalu made a very unusual internet presentation that got much media coverage here. 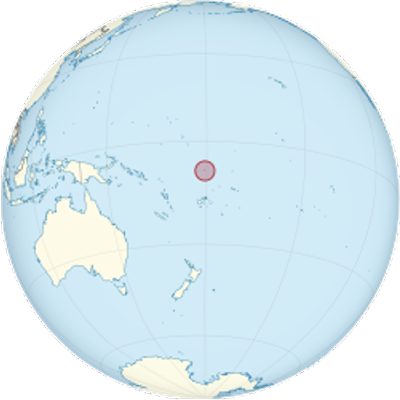 The red circle represents the location of Tuvalu, east of Papa. New Guinea. 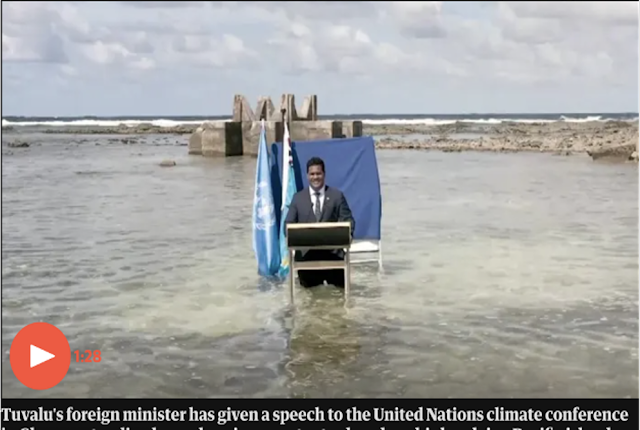 However, VJ, Jayaraj, a researcher with the CO2 coalition pointed out in an article that these climate change conferences have a history of "false imagery" to generate fear.

So who should we believe? Simon or VJ?

The national tidal facility of Australia, which is now part of the Bureau of Meteorology had reported around Tuvalu between 1978 and 1999, there was no evidence of sea level rise acceleration

In Boretti 2020 the threats to Tuvalu were specifically examined and he concluded absolute sea level rise on Tuvalu was just 0.16 millimeters per year or one inch in 158 years.  Again, very similar to LA Jolla and the 5 Oceania stations.

Furthermore researchers examining photographs and satellite imagery of Tuvalu's islands investigated how much of the islands were eroding away. They found that the majority of islands have grown larger and that no islands had been lost. They calculated a net increase of 7.3% in island area in 2009. 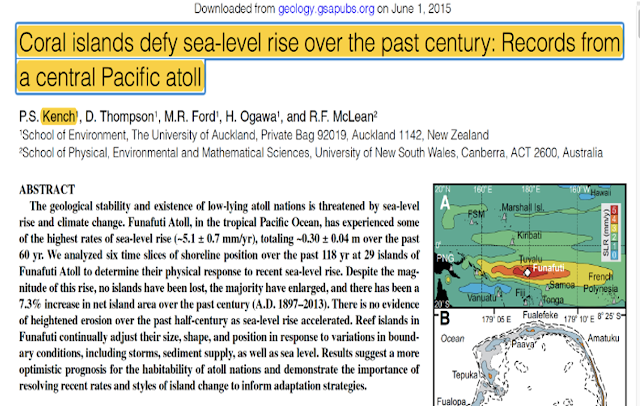 The politicians from the Maldives Island tried similar theatrics to encourage the United Nations members to fund their island nations development.

The Maldives are located in the Indian Ocean, as indicated here by the circle, 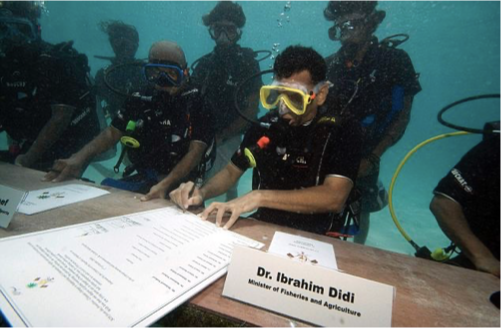 But now instead of abandoning the islands due to climate change, they are building artificially low elevation islands to accommodate more tourists in expanding populations, 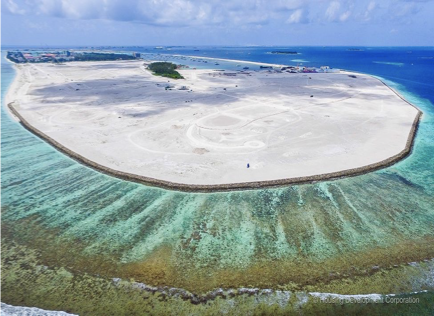 Ignorant climate crises believers, try to shame people into accepting their political agenda, arguing the world's climate crisis is due to greedy people, especially those who resist their solutions for a happy earth. 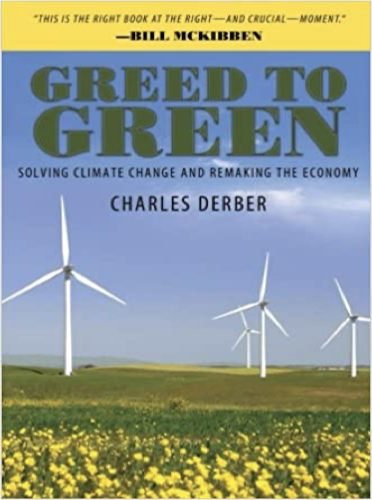 You are greedy for using coal and oil to stay warm in the winter.

You are greedy for driving gasoline powered cars and trucks.

You are greedy for eating beef and supporting methane laden, cow farts.

And it is you who are threatening coastal towns with sea level rise, even though absolute sea level rise is only one inch every 150 years.

Politicians are trying to guilt trip you with misleading information to justify why, you must accept any discomforts from their agenda to deny you the use of fossil fuels.

Now up next, I'm going to debunk climate crises analysis of floods and droughts, but until then embrace renowned scientists. Thomas Huxley's advice that skepticism is the highest of duties and blind faith, the one unpardonable sin.

And if you appreciate the science clearly presented here, science rarely presented by mainstream media. Then please give it a like, give it a share or copy the video's URL and email it to friends. Subscribe to my channel, to see all videos easily are read my book, landscapes and cycles and environmentalist journey to climate skepticism. Thank you.