To watch the video "HALF-TRUTHS ABOUT RETREATING GLACIERS" visit
https://youtu.be/NAzHNoyIsZQ

below is the transcript

Welcome back to this examination of Half Truths About Retreating Glaciers in part 6 of How Pressure Systems Control Climate.

There is no question what-so-ever that most of the world's glaciers have been retreating. However because the elites at Climate.gov believe rising CO2 is causing all the earth's warming, they mistakenly assume it iscan also be blamed for retreating glaciers, stating

"the most dramatic evidence that earth's climate is warming is the retreat and disappearance of mountain glaciers around the world."

So, the public is fed half-truths about a CO2 climate crisis causing glacier retreat.

In contrast, there is wealth of opposing, peer-reviewed, published, scientific evidence demonstrating that changing patterns of moisture transport control the ebbs and flows of glaciers - not global average temperature. So here I will share just a small portion of that science for you to follow.

Just consider that Greenland's Jakobshavn glacier retreated by half its length before 1851 during cooler times. Clearly dynamics other than warming are in play, dynamics shamefully downplayed or not discussed at all by mainstream media.

A growing number of scientists have been questioning the dogma that the Little Ice Age's glacier growth and subsequent retreat, was driven by changing temperature. As Norwegian glacier expert Atle Nesje queried

"The Little Ice Age - only temperature? 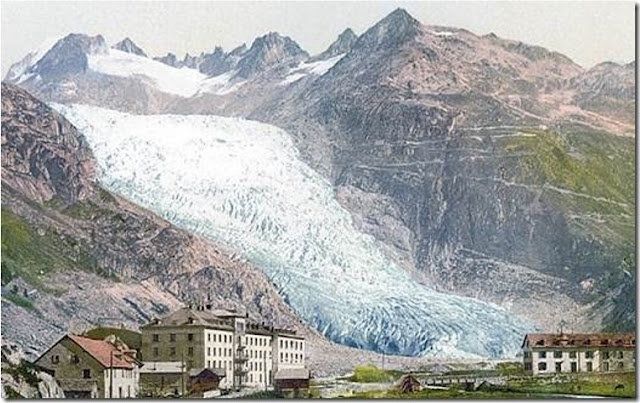 In that regard climate scientist Michael Mann wrote, "the little ice age was a time of modest cooling of the northern hemisphere by about 0.6 degrees Celsius." those centuries may have been "more significant in terms of increased climate variability."

Glaciers can be characterized by two different but intimately linked zones. 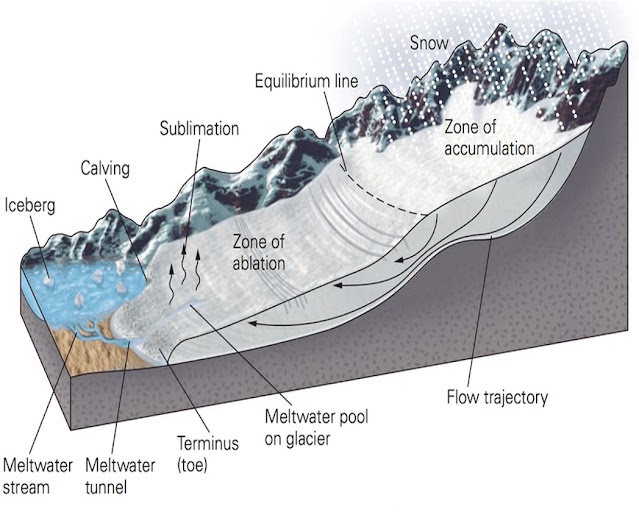 The ablation zone is located at the lower end of a glacier, there, snow and ice are lost during the warm summer melt season. So, some scientists argue glaciers are retreating because CO2 global warming is increasing ablation.

At the top of a glacier is the colder accumulation zone where snow and ice are added to a glacier. When there is less replenishment of ice in the accumulation zone due to decreased precipitation, less ice is transported downslope causing the ablation zone to retreat.

Thus, less precipitation can cause retreating glaciers even when temperatures are not warming. 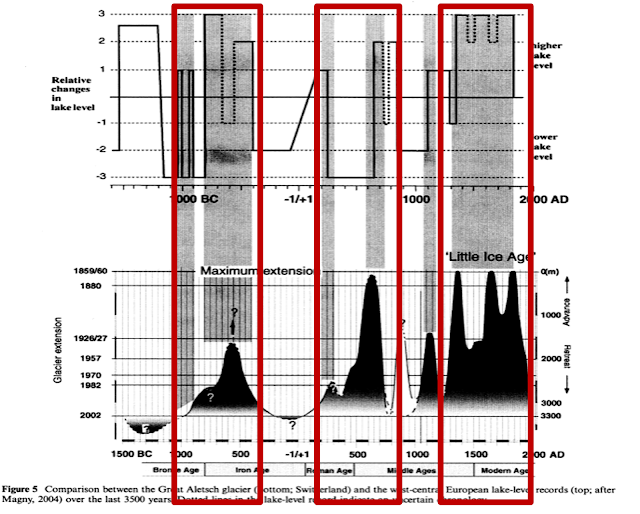 In the paper "solving the paradox of the end of the little ice age in the Alps," Vincent reported that our current retreat of alpine glaciers had resulted from a 25+% decrease in winter precipitation since 1830.

During the positive phase those pressure systems intensify and shift the winds northward towards Scandinavia. In the positive phase, precipitation is diverted away from southern Europe causing its glaciers to retreat, while simultaneously redirecting moisture to the Scandinavian coast where glaciers were growing since 1967. 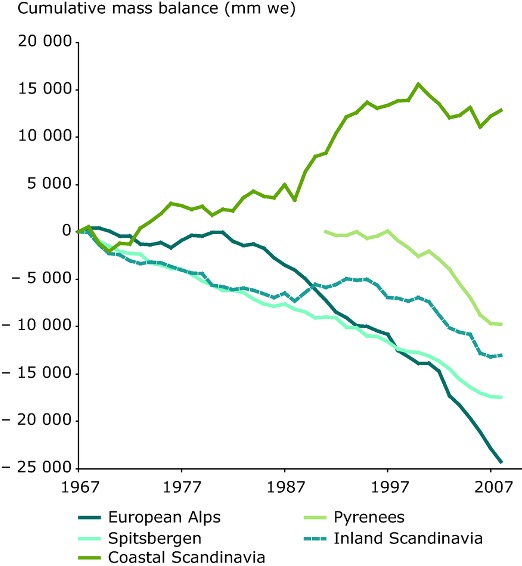 The North Atlantic Oscillation can shift phases from month to month but on average can favor one phase for decades or centuries.

During the little ice age, the scientific consensus suggests the North Atlantic Oscillation was primarily in its negative phase, accounting for the growing glaciers in southern Europe. But since at least 1920, it has been in the positive phase more often, accounting for the high percentage of retreating Alpine glaciers

Between 1950 and 1980, during a slightly more more negative phase of the oscillation the number of advancing Alpine glaciers increased to over 60%. But with a return to a more positive phase, fewer than 5% of the Alps’ glaciers are now observed advancing and most are retreating. 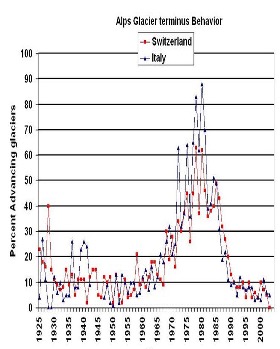 Due to the surprising denial of precipitation effects on glaciers, politicians and climate crisis promoters argued rising CO2 would cause the extinction of Mount Kilimanjaro’s glacier before 2020.

However, based on past lake levels, such as nearby Lake Naivasha’s, precipitation changes correlate with the ebbs and flows of Kilimanjaro’s glacier.

1000 years ago, during the Medieval Warm Period this region of Africa was much drier than today, and the existing glacier of that time likely disappeared.

Then during the Little Ice Age, coinciding with sunspot minimums the Intertropical Convergence Zone migrated southward, the region experienced increasing rainfall and a new glacier evolved, reaching its maximum area by the late 1700s. 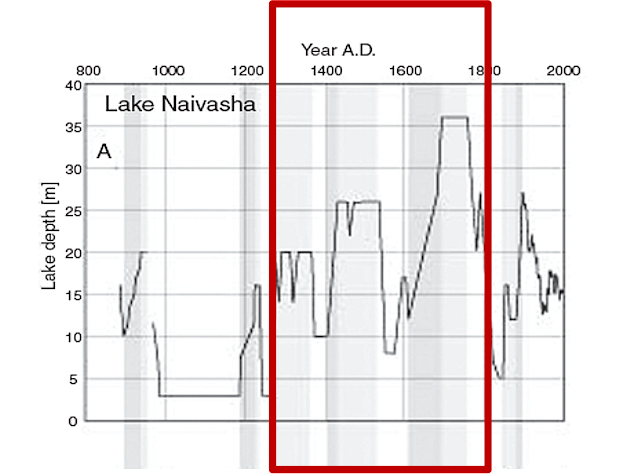 In 2007, glacier expert Douglas Hardy summarized the research indicating Kilimanjaro’s current glacier is only about 50-200 years old, in agreement with the timing of Lake Naivasha’s high stand.

Similarly, research by Cullen (2006) concluded glaciers on Kilimanjaro are merely remnants of a past climate rather than a sensitive indicator of 20th century climate change

Curiously, over the past 4 years as sunspots approach a century low, lake Naivasha’s lake levels have been increasing along with increased snowfall on Kilimanjaro. So, keep an eye out for how Kilimanjaro responds. It certainly hasn’t disappeared as Al Gore or Michael Mann predicted.

By ignoring the precipitation dynamics of previous centuries click-bait media uses graphs like this to suggest the glacier may soon disappear and incorrectly blame CO2 warming. 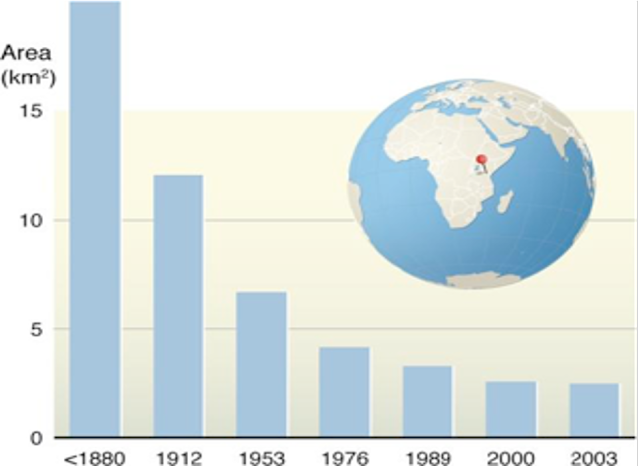 The climate crisis narratives typically fail to report renowned glacier expert Georg Kaser's 2010 explanation of that decline stating, "the near extinction of Kilimanjaro’s plateau ice in modern times is controlled by the absence of regional wet periods rather than changes in local air temperature on the peak of Kilimanjaro."

When the North Atlantic Oscillation changed to its positive phase, wet regions switched to dry regions, with resulting glacier retreats.

Glacier National Park, on the USA-Canadian border, sits at a pivot point of the North Atlantic Oscillation's wet/dry see saw.

The park's largest glacier, the Sperry, reached its maximum size in the mid 1800s during the wet negative phase. The ensuing drought conditions when the North Atlantic Oscillation switched to its positive phase, caused the Sperry to lose 62% of its area between 1850 and 1945. 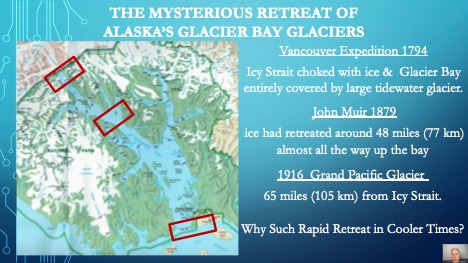 Eighty-five years later in 1879, before global warming had begun, John Muir visited Glacier Bay to find the glacier had retreated a whopping 48 miles.

By 1916 the bay's main glacier had retreated an additional 17 miles Why such a rapid retreat in cooler times?

To complicate matters, there are still glaciers that are currently growing despite warmer temperatures. 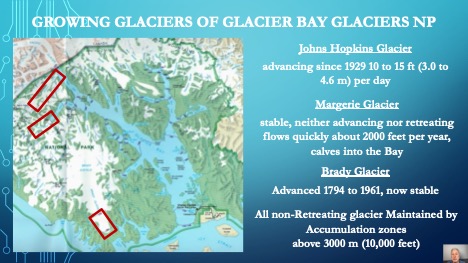 The Johns Hopkins glacier has been advancing since 1929.

The Margerie glacier flows downslope at a rate of 2000 feet per year where its terminus maintains a stable position by calving ice bergs into the bay.

The key to understanding these contrasting fluctuations is that the non-retreating glaciers have accumulation zones at elevations above 10,000 feet or 3 kilometers.

Livia Jakob’s 2021 study of glacier behavior in the Gulf of Alaska since 2010 showed contrasting glacier fluctuations were a function of elevation. Glacier Bay is fed by glaciers in the St Elias mountains (shown here in orange) 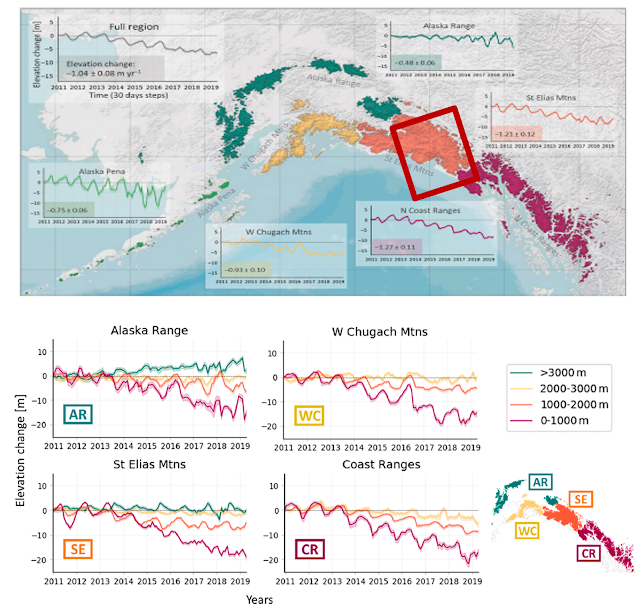 Glaciers originating in the higher elevation mountains are stable or gaining ice over the past decade as seen by the green trend lines in the St Elias Mountains and the Alaska Range mountains.

In contrast, glaciers at lower elevations are losing ice, the reds and yellow trend lines. Coincidentally, most of the small glaciers that once contributed to the glacier that had filled Glacier Bay and seen during the Vancouver expedition, had accumulation zones below 10,000 feet.

Clearly, in addition to precipitation amounts, glacier growth and retreat are functions of elevation 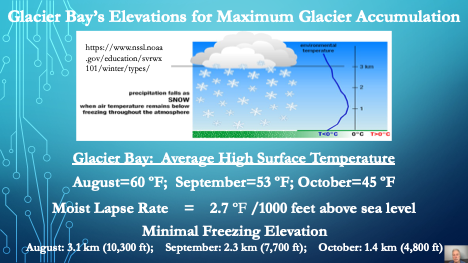 Snow forms when water vapor freezes and freezing temperatures are typically encountered at 10,000 feet and above. For snow to accumulate on a mountain slope, local air temperatures must remain below freezing all the way to the surface.

However, during the summer, Glacier Bay's average high surface temperatures are above freezing in August through October, just when peak precipitation occurs.

Using a moist lapse rate of 2.7 ºF cooling for every 1000-foot increase in altitude, we can calculate the elevation where snow will accumulate each month.

Atmospheric rivers carry the bulk of moisture from the tropics to the higher latitudes. Where atmospheric rivers make landfall is determined by the seasonal position of the Pacific’s high- and low-pressure systems.

The more northerly position of the Pacific High-pressure system during summer guides more atmospheric rivers into the Gulf of Alaska during August through October. Accordingly, Glacier Bay's peak precipitation happens during September and October. 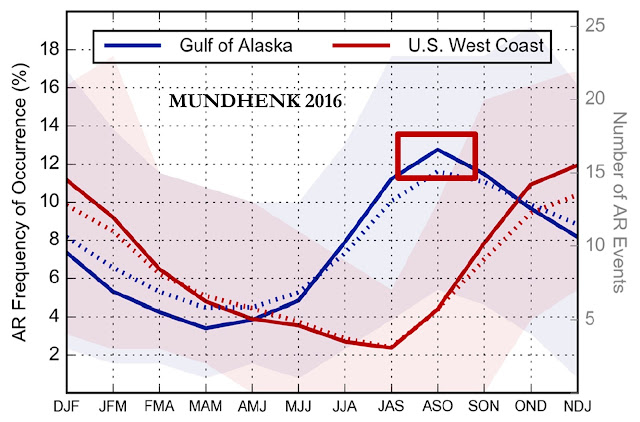 Without accounting for elevation freezing points such contrasting effects have caused some correlational studies to mistakenly suggest precipitation has no significant effect on a glaciers overall growth.

The moisture transport to the Himalayan glaciers is more complicated.

The greatest accumulation of ice in the Mount Everest region is driven by summer monsoons. And similar to northwestern North America’s glaciers, El Ninos and La Ninas will cause decadal ebbs and flows of moisture transport to those glaciers.

Nonetheless, a multitude of researchers such as Shekhar (2017) and Singh 2020. They have reported a long-term drying trend that began in the late phases of the Little Ice Age causing retreating Himalayan glaciers before the rise of industrial CO2. 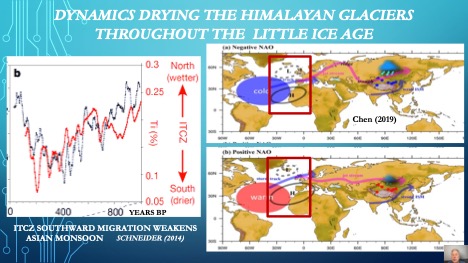 As solar irradiance rebounded from its depths during the Maunder sunspot minimum, the ITCZ and associated pressure systems began migrating northward, also driving the jet stream northward and reducing moisture transport to the Himalaya.

The interplay of these conflicting dynamics makes it difficult to predict future glacier changes in the Himalaya.

Nonetheless, the politically driven United Nations Environmental Programme, or UNEP argues the decline of Himalayan glaciers are a "clear indicator of [CO2] climate change" and an "obvious indicator of warming temperatures" and they provide this illustration to support their narrative. 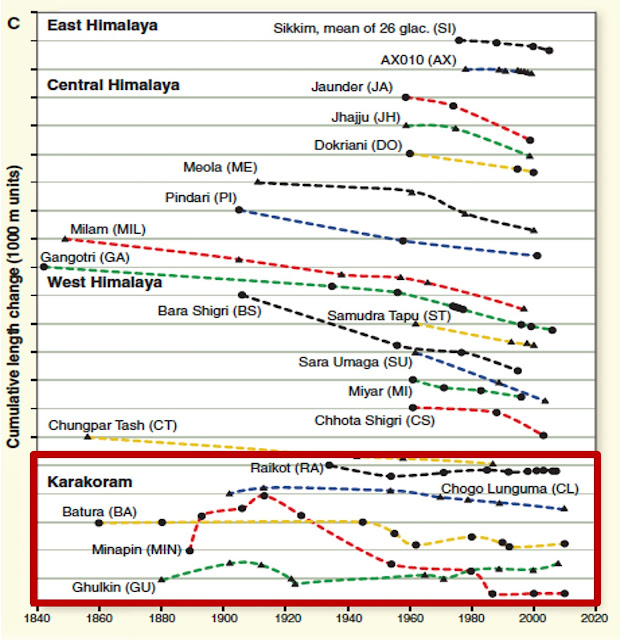 However, their bias is immediately obvious.

They illustrate a strong decline in 3 Karakorum glaciers, but just one stable glacier and one that is slightly gaining ice. In contrast, glacier expert Melanie Rankl's 2014 study reported nearly 80% of Karakorum’s glaciers were stable, 5% were advancing and only 7.6% were retreating.

Furthermore, due to a dearth of long-term surveys, most of the Himalayan retreating trends begin around 1960, and that provides the misleading optics used to support a narrative of human-caused CO2 warming. UNEP provides only 2 trends beginning around 1850, and those clearly demonstrate glacier retreats began before global warming.

The United Nations is disturbingly spreading mis-information by not informing the public about the well-documented drying trends that initiated glacier retreat before rising CO2.

But then again, I expect nothing less from an agenda-driven organization that brings a sixteen- year-old actress front and center to brow beat the public about climate science. 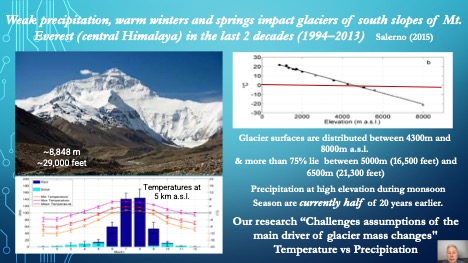 Glacier accumulation zones are fed by monsoonal moisture peaking in July and August. Accumulation zones must be above 5000 meters as summer monsoonal flows raise the surface temperatures above freezing at 5000 meters. However, measurements reveal precipitation at high elevations was just half of what it had been 20 years before Salerno's study.

That fact led Salerno to conclude their research “Challenges the assumption that temperature is the main driver of glacier mass changes.” 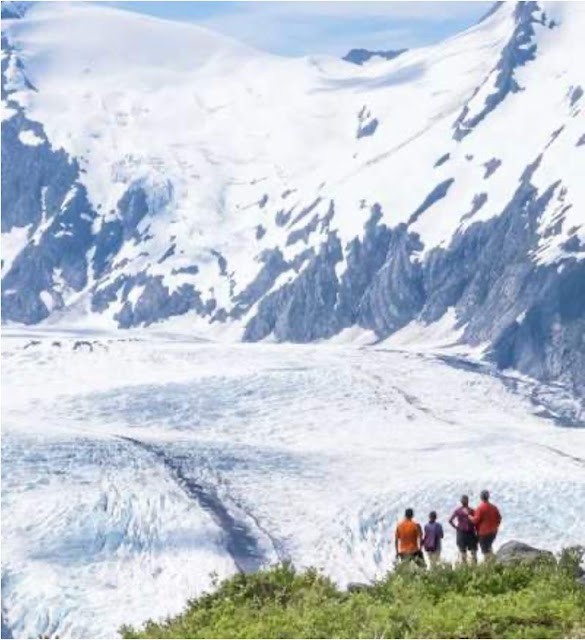 So, what does the future hold for the Earth's glaciers?

Understanding that moisture transport, not global average temperature, controls glacier growth, suggests they are not in crisis

A return to the negative phase of the North Atlantic Oscillation would reverse the retreat of many of the world's glaciers.

Although glacier lengths may shrink, accumulation zones will survive where there is adequate precipitation.

But the ultimate control will be determined by solar effects on the ITCZ’s latitude and its associated pressure systems. While changes in sunspots and irradiance are unpredictable, the orbital influence of the obliquity cycle suggests the ITCZ will continue to move southward for another 10,000 years causing Little Ice Age-like growth of the world's glaciers.