HOW PRESSURE SYSTEMS CONTROL THE CLIMATE: PART 1 – THE DECLINE IN EXTREME WEATHER

HOW PRESSURE SYSTEMS CONTROL THE CLIMATE: PART 1 – THE DECLINE IN EXTREME WEATHER

The transcript is below 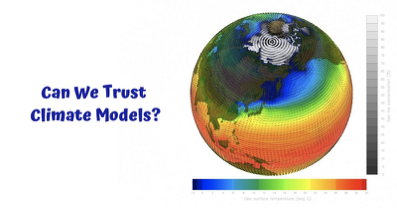 In response to public questioning of how global warming could possibly cause both floods and droughts, scientists who were obsessed with a climate crisis, pushed a simplistic meme that wet regions will get wetter and dry regions will get driers. Unlike the absurd claims that rising co2 is causing everything from more wars and prostitution to more wildfires and higher divorce rates in albatrosses, their wet gets wetter – dry gets drier meme has some basis in reality 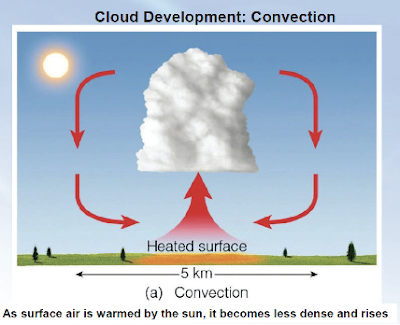 As scientists studying clouds on a microscale of 5 kilometers report, convection is in part initiated by solar heated earth surfaces that contact the air making the air warmer, less dense and more buoyant, and causing it to rise. 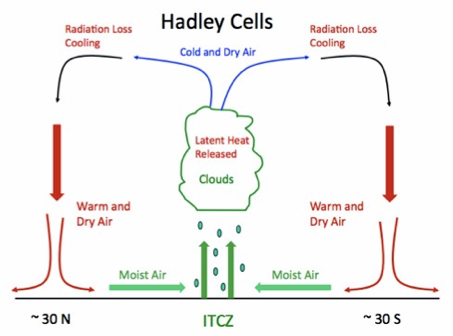 The exact same dynamics are at work on larger scales. The Hadley Circulation cell covering 7000 kilometers, its driven by intense solar heating around the equator, resulting in an area of low pressure with rising moist air. That air cools and condenses as it rises, resulting in the earth’s heaviest rainfall.

What goes up must come down, and having lost it moisture while rising, regions of dry sinking air happen a few thousand kilometers to the north and south, creating a large area of exceptional dryness beneath high-pressure systems. Therefore, assuming rising CO2 is warming the planet, it was then logical to believe a warming planet would increase convection And increase rain-making but also increase the sinking air elsewhere that fosters dryness

So their models were constructed accordingly.

The problem is, as research reveals,  observations do not support their CO2 connection.

Here I simultaneously present two views of the earth's major circulation patterns. Upper panel shows a cross-section of the northern hemisphere.    The lower illustration shows the average position of quasi-permanent pressure systems across the globe, here for the month of January 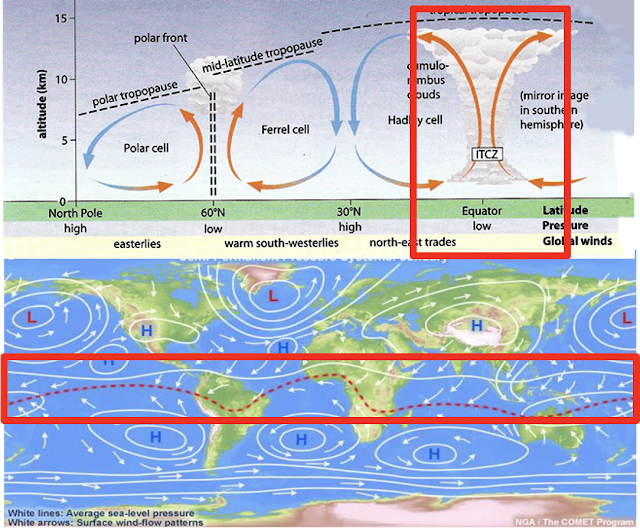 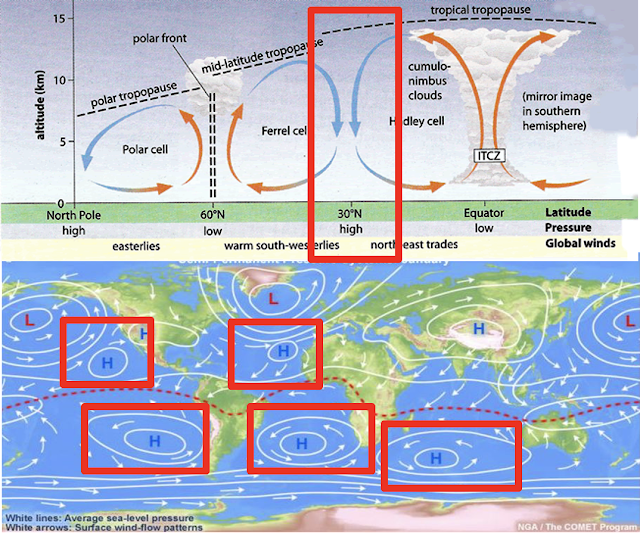 The descending air happens about 30 degrees poleward of the equator and is focused over the oceans, and can reduce the transport of moisture which results in the earth's great desert regions

Recent results from an international team of scientists, referred to here as taszarek et al 2021, Examined trends in global rainfall based on observational data and the European Centre for Medium Range Weather Forecasts' global reanalysis model from 1979–2019.

Research results suggested just the opposite of what global crisis warming theory predicts. On average the earth is experiencing declining convective energy, and thus declining extreme storms and rainfall. The wettest regions are getting drier.

This research was not trumpeted by the mainstream media, because it did not promote the click-bait climate crises the media seeks to profit from.

This map from their results illustrates the earth's regions with the greatest precipitation. As expected from the Hadley Circulation, the regions of the greatest annual rainfall exist in the low-pressure ITCZ regions around the equator, supporting the tropical rainforest ecosystems of the Amazon, central Africa and southeast Asia’s maritime continent consisting of Indonesia, Malaysia, Borneo and the Philippines and seas of the Coral Triangle, all colored in reds.

Areas in green to white are low rainfall areas, beneath dry high-pressure areas in the sub-tropics 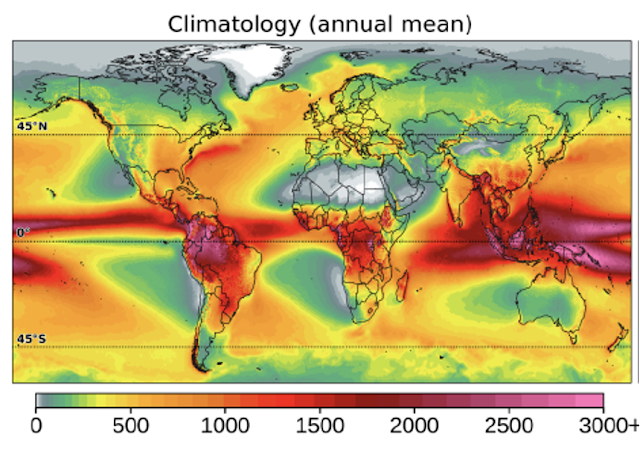 The trends from precipitation data suggests those wet areas are getting drier as seen here in blue. Significant drying is shown with hatched marks suggesting a decrease in evaporation contrary to global warming models There are also some non-significant wetter regions illustrated in light yellow but dry areas show very little increased rainfall 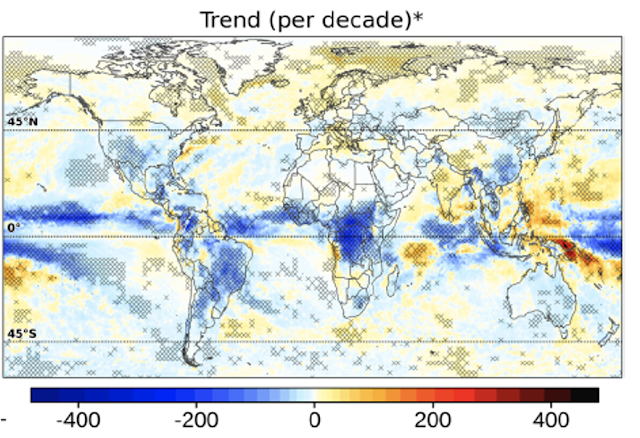 Convective storms like hurricanes, tornadoes, heavy rain, hail & lightning are most destructive. So, to better predict these storms, scientists track changes in, CAPE, C-A-P-E, abbreviated for Convection Available Potential Energy. CAPE is driven by the warmer and moisture conditions of an air mass relative to its surrounding environment. As would be expected, the greatest annually averaged amount of potential energy for convection coincides with the warm moist regions where the greatest rainfall is observed . 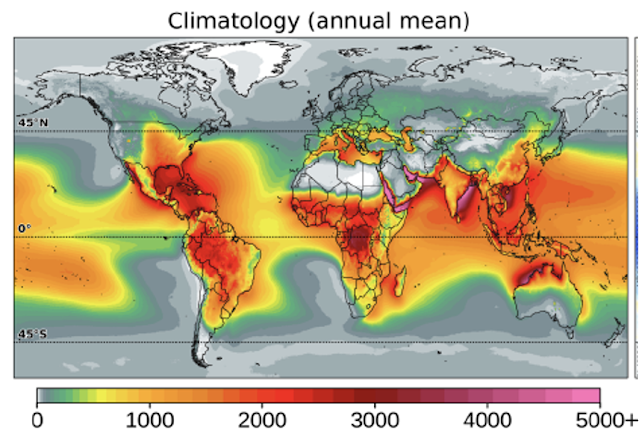 But again, contrary to climate crises predictions the energy for convection and more extreme storms has declined for most regions. 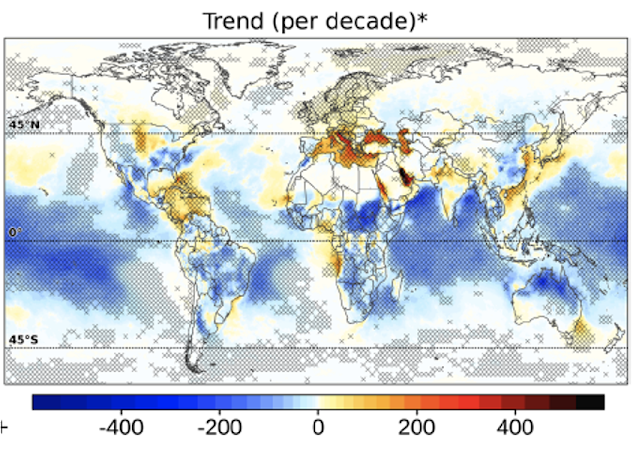 The cause for higher potential energy outside the tropics over the USA’s Great Plains and southern Europe requires some additIonal explanation. The high CAPE is partially driven by the result of warm moist air lying below dry cold air, dry due to crossing the mountains of western USA or arriving from the Sahara Desert.

The question then arises, if the smoke here doesn’t rise much higher than a thousand feet, how can warm air in the tropics rise to 14,000 meters? The answers has to do with the interaction of moist air with dry air

As known from the gas laws, dry air temperature drops by 10C for every 1000 meters it rises, solely due to the decrease in air pressure (referred to as adiabatic cooling). 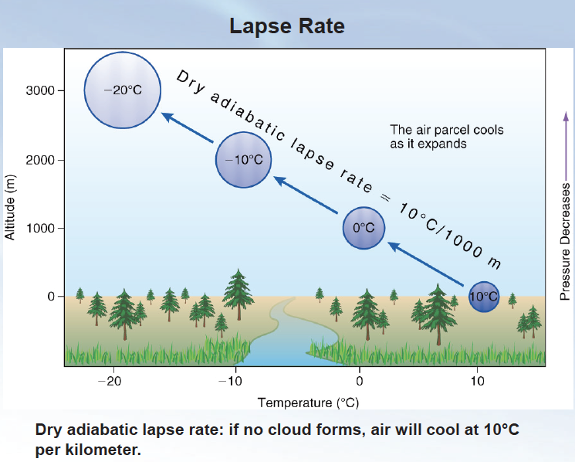 However, moist air does not cool so rapidly. As moist air rises and cools it reaches a temperature that causes the water vapor to saturate and convert to liquid rain, which releases the extra heat the water vapor acquired during evaporation.

That released heat energy causes rising moist air to cool more slowly than surrounding dry air. Moist air cools at a rate of just 6C for every 1000 meters of altitude. It is that release of heat from water vapor that allows moist air in the tropics to remain warmer than its surrounding and allows rising air currents to reach 14,000 m in altitude, as well as providing more convective energy. 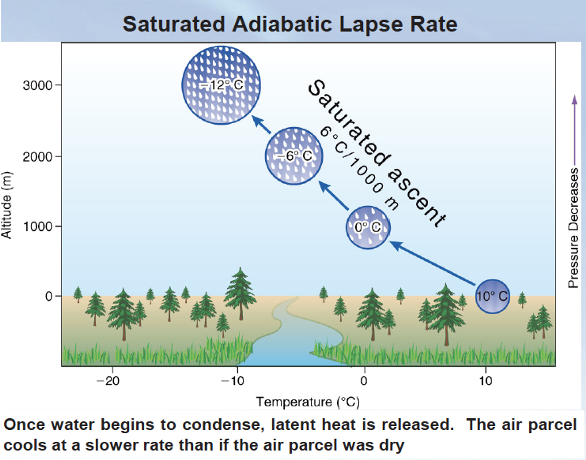 Accordingly, Taszarek 2021 found the highest frequency of thunderstorms in the in the warm moist tropics, but also reported a relatively high rate in the eastern USA. This is because the Pacific high-pressure system reduces moisture flowing from the ocean over the western USA. The eastward moving air is further dried as it passes over the western mountains. After passing over the rocky mountains, the resulting dry air often rides above the warm humid air being pushed into the great plains and eastern USA by the Atlantic high-pressure system, setting the stage for intense convective thunderstorms and tornados. 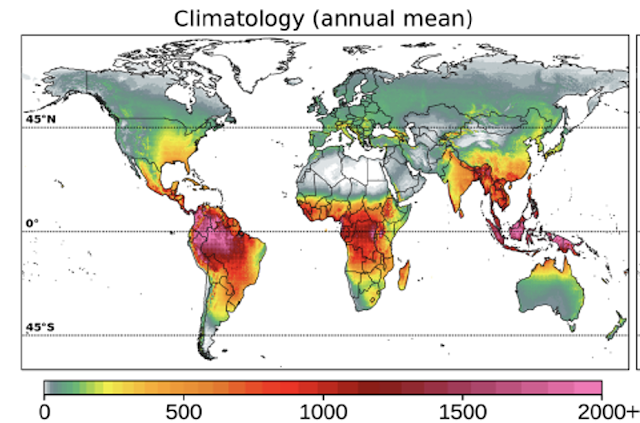 Yet despite the global warming narrative that global warming increases humidity and increases convective energy thus intensifying storms, thunderstorm frequency around the world, except for over India, has been declining. 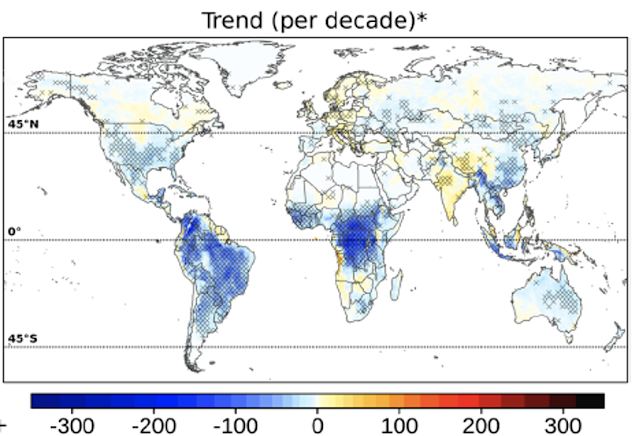 Some of the most severe thunderstorms happen in regions where air is moving across mountain ranges and interacting with moist air causing the greatest duration of severe thunderstorms Yet again, in contrast to climate crises narratives, most of those regions have experienced fewer severe storms

This scientifically documented decrease in convective potential energy and thunderstorms correlates with the decreasing trend in severe USA tornadoes. 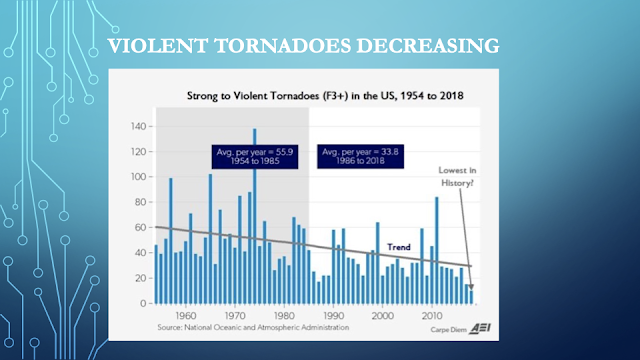 Despite the data, the chief climate alarmist and digital book burner, the Joeseph Goebbels of climate change, Michael Mann, has been the media's go to person for click-bait climate crisis narratives

But the graph is just an extension of the very same declining trend NOAA had produced until 2014. 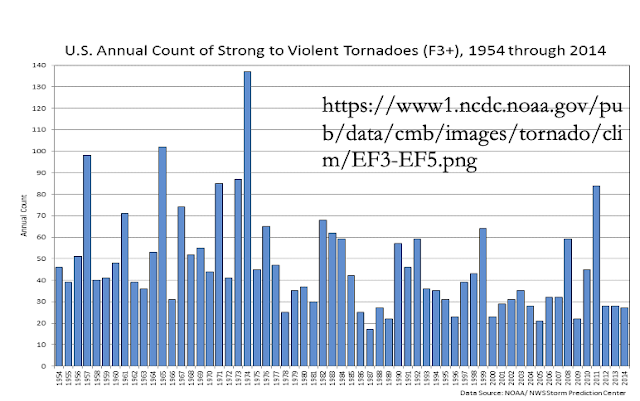 What NOAA’s website likes to now show are graphs of total counts, and 75% of that count is due to additions of very weak tornadoes that often escaped detection in the past.

Total counts had suggested the same declining trend from the 70s to 1980s, as the declining counts of just severe tornadoes

The sharp increase since the 1980s was the result of the Weather Service employing more storm spotters which added more very weak tornadoes to the count. According to a NOAA research paper tornado detection probabilities since 1987 increased from 30% to 75% in 2002

And despite increased detection, total counts have declined over the past 2 decades

So trust the science, not alarmists media nor wayward scientists like Michael Mann

Lastly, Severe convective storms are not always simplistically driven by warm moist air. Sometimes an air mass requires a disturbance that raises moist air to an altitude at which water vapor converts to liquid to initiate free convection.

Other disturbances increase the dry air One such disturbance is caused by El Nino events during which the regions of tropical convection shift across the pacific altering regions of dry high-pressure systems and wet low-pressure systems as seen here. That pattern changes during La Ninas which increase dry air masses in the western USA and enhances convective energy potential for tornado weather 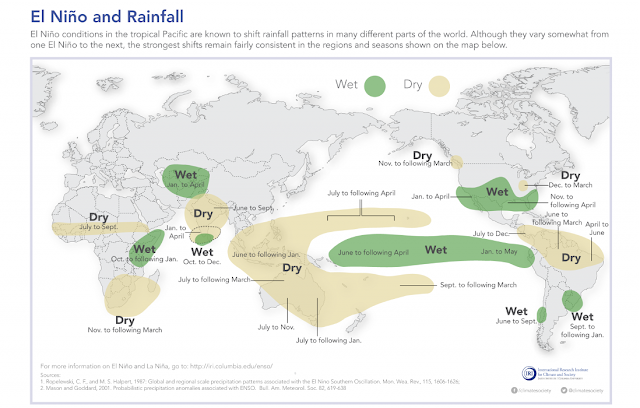 Up next HOW PRESSURE SYSTEMS CONTROL THE CLIMATE: PART 2 - DESERTS AND DROUGHTS

Until then embrace Thomas Huxley's sage advice: skepticism is the highest of duties and blind faith the one unpardonable sin

If you appreciate the science clearly presented here, science rarely presented by mainstream media, then please give it a like, share the video or subscribe to my channel to see all my videos or read my book Landscapes and Cycles and Environmentalists Journey tp climate skepticism