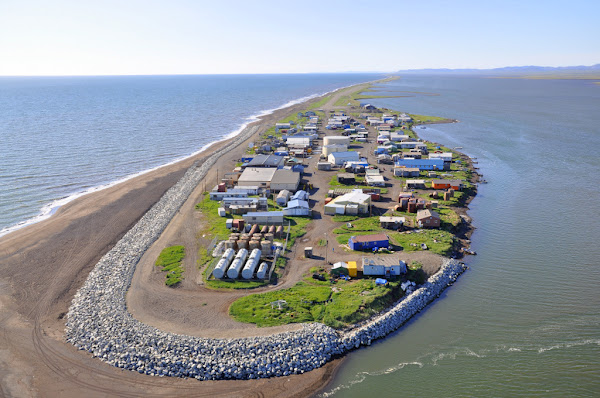 In 2017 Huffington Post wrote, “It is disappearing. Fast. Kivalina could be uninhabitable by 2025, all thanks to climate change.” Like so many media outlets and politicians, they were ignoring Kivalina’s real problem. Kivalina was never a place the Inupiaq freely chose to settle. With survival on the line, they were intimately aware of Alaska’s everchanging environments, long before the theory of CO2?induced?climate?change could be blamed. Kivalina was a good seasonal hunting camp, but never valued as a permanent settlement. Indigenous Alaskans had wisely chosen to be semi-nomadic. Nonetheless the Inupiaq were victimized by  mis-guided government attempts to enforce “permanence” in an everchanging climate when the US Department of the Interior’s Bureau of Indian Affairs (BIA) made it a permanent settlement in 1905.

As REVEAL reported, “The Inupiaq used to spend summers in tents along Kivalina's beach. When winter set in, they'd move inland to hunt caribou for food. They were semi-nomadic but in 1905 the federal government built a school on the island. Parents were threatened with jail time or losing their kids all together if they didn't send them to school.” In 1911 just 6 years after forced settlement, and long before any “dangerous sea level rise” or “dangerous sea ice reduction”, Kivalina’s schoolteacher Clinton Replogle warned that Kivalina should be relocated due to threats of flooding from ocean storms.

As with most  barrier islands, Kivalina island was formed from a loosely consolidated sand bar. Ocean waves drove sand and gravel back towards the coast where in the shallows it accumulated into a sand bar. Erosion by river flow on its landward side maintained a lagoon and the bar’s narrow width. Barrier islands form when rivers seeking an outlet to the ocean cut the sand bars into pieces. Kivalina’s river outlet is unstable. Some years it’s blocked by sand piled up during winter storm waves. Later it’s re-opened by river erosion. As Tribal Administrator Millie Hawley recently stated, “Kivalina was always eroding.”

Barrier islands form where shallow?sloping ocean floors minimize any loss of sand that might irretrievably wash away into the deeper ocean. However, such shallow ocean floors also amplify wave heights of approaching storms. Kivalina’s ultimate height, a mere 13 feet, was determined by the sediments dropped from overtopping waves. Kivalina was established within 1 to 2 feet of the high tide mark even though storms in late summer and the ice?free fall deliver waves 10 feet or higher. No wonder the threat of devastating storm surge and floods was so clear to Clinton Replogle. Indeed, geological surveys have revealed flooding from waves that had overtopped Kivalina happened at least twice between1905 and 1990.

In 1994, before climate change reduced Chukchi Sea ice, Inupiaq residents initiated a study to relocate. However,  in an economy based on subsistence harvesting of seals, walrus, whale, salmon, and caribou, funding for relocation was scarce. State and federal governments offered little support. So, after government reports touted “destructive global warming”, in 2011 the residents opted to file a lawsuit against the major oil companies arguing “Kivalina must be relocated due to global warming” and sought funds to cover an estimated cost of $95 million to $400 million. Although their lawsuit failed, previously little?cared?about Kivalina was thrust into the limelight as an icon of the “climate crisis”. Alarmist media outlets repeatedly claimed Kivalina was disappearing because increasing CO2 concentrations were raising sea levels and reducing sea ice. But the science suggests otherwise.

Sea levels across the Arctic vary as winds remove water from one region and pile it up in another. Along the Chukchi coast bordering Kivalina sea level had not risen since the 1990s.  Furthermore, summer winds cause warmer waters to flow northward through the Bering Strait, which initiates sea ice melt every year. Over the past few decades those winds doubled the volume of warm water flowing through the strait, melting more ice. In contrast to fears about less ice, more open water enhanced photosynthesis and increased the  marine food web that the Inupiaq depend on by 30% .

Any connection between a greenhouse effect, increased warm water flow through the Bering Strait and Kivalina’s erosion remains to be seen. Kivalina is still an iconic example, not of a climate change crisis, but of media and government inattention to injustices perpetrated on indigenous Alaskans until it’s a useful political tool to fabricate a crisis. I suggest defunding the BIA for forcing settlements on vulnerable habitat and use BIA’s 1.9?billion?dollar budget to relocate the Inupiat to a place of their choosing.

Posted by Jim Steele at 9:58 PM No comments: