Watch my youtube video HOW TRANSPORT OF TROPICAL OCEAN HEAT CAUSES AN OVER-ESTIMATION OF THE GLOBAL AVERAGE TEMPERATURE  PART 1
https://www.youtube.com/watch?v=KNT7oB53pRY 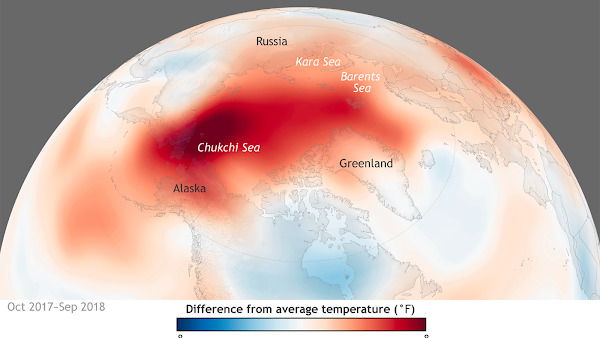 Below is a transcript of THEE video
Welcome back everybody,
Today I'll examine how the transport of tropical ocean heat raises both the Arctic's air temperature and biases the global average temperature. Now the Arctic has warmed dramatically, but why? A few researchers simplistically suggest it's polar amplification of greenhouse warming, but that explanation fails to explain why at the Southern pole, most of Antarctica has never warmed. This video explains how extensive transport of tropical ocean heat uniquely warms the Arctic. It also demonstrates why it's an abuse of statistics to average extreme warming temperatures in the Arctic with temperatures elsewhere, such as the cooling in north America.
Averaging two temperatures caused by vastly different dynamics is meaningless and useless for understanding climate change. It’s as useless as averaging apples and oranges just because they're both fruits. So here in part one, I'll examine how transported tropical ocean water affects the Arctic sea ice.   Part 2 examines how the natural Arctic oscillation affects the presence or absence of thick sea ice and how sea ice controls the release of stored heat and affects Arctic temperatures. And in part 3, we'll examine the climate dynamics that control the changes in the ocean heat transport. 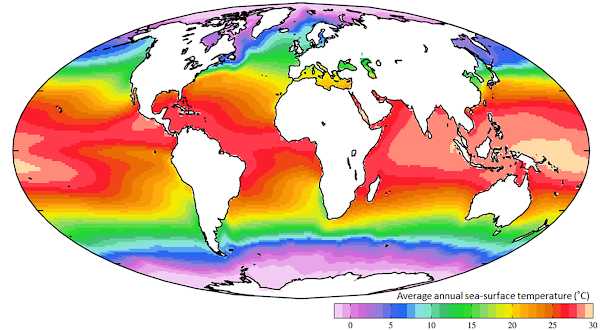 First, we need an overview of how the world's ocean temperatures vary. The oceans are warmest in the tropics (seen in red) Due to the sun's most intense heating of the surface, temperatures are averaging 20 degrees centigrade or 68 degrees Fahrenheit. Ocean temperatures decrease towards the higher latitudes as the Earth's curve and the axis tilt decrease solar heating. Between 50 and 60 degrees south latitude, we see temperatures are much lower, averaging between five and zero degrees centigrade. And due to the Antarctic circumpolar current, the warmer subtropical waters, averaging about 10 plus degrees centigrade seen in green, can't intrude further south preventing any warming of Antarctica. As discussed in a previous video “The Antarctic Refrigeration Effect”,  in contrast between 50 and 60 degrees north, warm subtropical waters intrude deep into the Arctic. 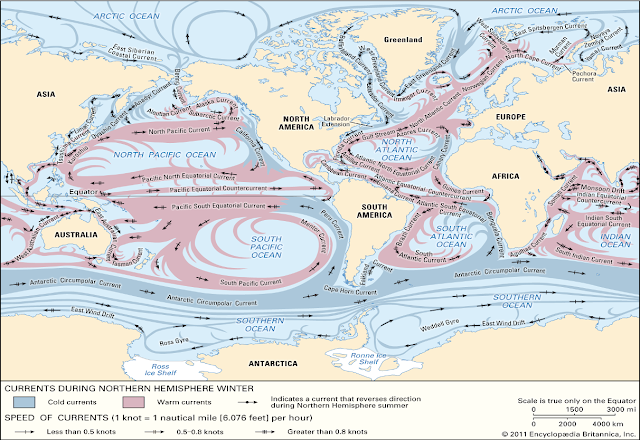 Now talking with fellow scientists and lay people about Arctic warming, I am constantly amazed that typically, they're totally unaware of how ocean circulation affects the Arctic.
Here I'll focus on the Northern hemisphere’s circular pattern of ocean circulation, creating what's called subtropical gyres. A similar pattern also occurs in the Southern hemisphere.
Now due to intense solar heating, the tropical waters are warmest and that heating also generates the trade winds blowing water from the east to the west. When reaching the ocean’s western boundary, those heated waters are guided towards the poles, via the Gulf stream in the Atlantic, and the Kuroshio current in the Pacific.
Upon reaching the mid-latitudes, the westerly winds then guide the warm waters back towards the east. Upon reaching the continents’ west coast, the now cooler waters are pumped back towards the equator to complete the subtropical gyre’s circulation.
Of importance to humanity, the currents moving back towards the equator also create the four upwelling regions that support humanity's richest fisheries.
We also observe again in the Southern hemisphere, that the gyre’s warm tropical waters don't penetrate past the Antarctic Circumpolar Current, keeping Antartica cooler than average.
In contrast, there's a slight leakage of warm water from the Pacific through the Bering Strait and into the Arctic. And more importantly, it's the large volume of warm water transported via the Gulf stream into the north Atlantic that enters the Arctic, melting sea ice and warming the region. 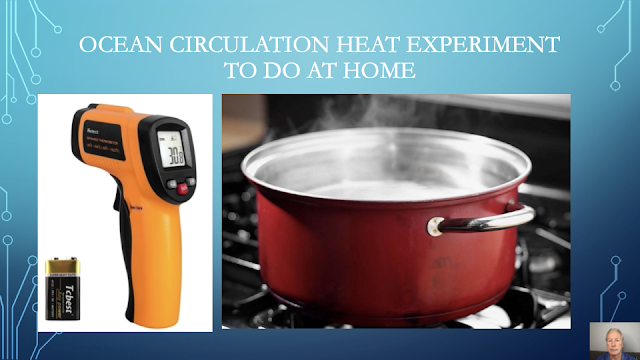 To understand how the transport of ocean heat biases temperature statistics, there's a simple experiment you can do at home and it is easily understood by children.
All you need is an infrared temperature gun (they cost less than 20 bucks) and a pot of heated water. I used the temperature gun to show students in environmental studies classes, how surface temperatures dramatically changed between open sunlit areas and shaded areas, or between different vegetation types, or moist versus dry ground.
So first heat up a pot of water, then turn off the heat, so no further energy is being added. Now measure the surface of the heated water and nine random spots on your kitchen floor. Add up those temperatures and divide by 10 to get the kitchen's average surface temperature.
Next, scoop out half of the water and throw it on the kitchen floor, and again, take the same 10 measurements. The pot of water lost the heat due to water removal, but the remaining water still keeps the same temperature. Now, however, the average temperature will be much higher, not because there was any energy added to the kitchen, but simply because the redistribution of heat raised the average statistic.
So to understand climate change, we must accurately separate temperature changes due solely to the redistribution of heat from changes due to added energy. And to date, I know of no researchers making this distinction when they are generating the global average temperature. 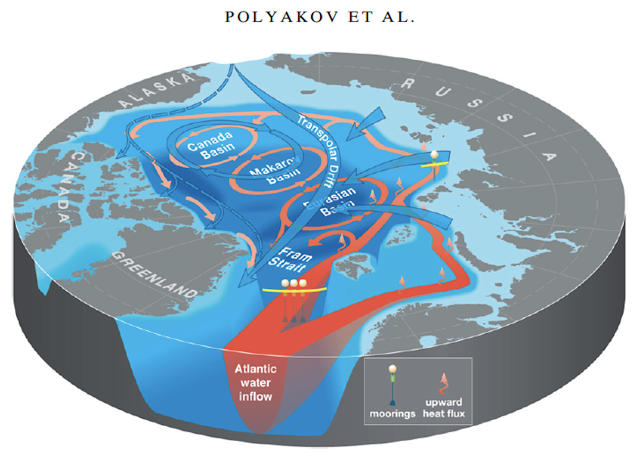 Now this illustration shows the general pathways of intruding warm Atlantic waters being re-distributed from the subtropics into the Arctic. The water changes color from the initial red to the lighter pink as it loses heat to the air and the surrounding waters as it circulates.
The small squiggly pink arrows represented here, show where most of the intruding warm water heat escapes to the air, primarily where there is no insulating ice.
Also because the warm inflows make the ocean warmer than the land, the Arctic winter winds blow towards the ocean and push ice away from the coast. This creates open-water winter polynyas.
Those open waters have allowed a subspecies of walrus that normally would migrate south each winter in search of open waters to feed, to instead remain all winter in the Laptev Sea
To estimate changes in temperature and volume of inflowing Atlantic water, scientists have placed moorings along the major pathways, such as the Fram straight and elsewhere (represented here by the yellow lines) to monitor the inflows. 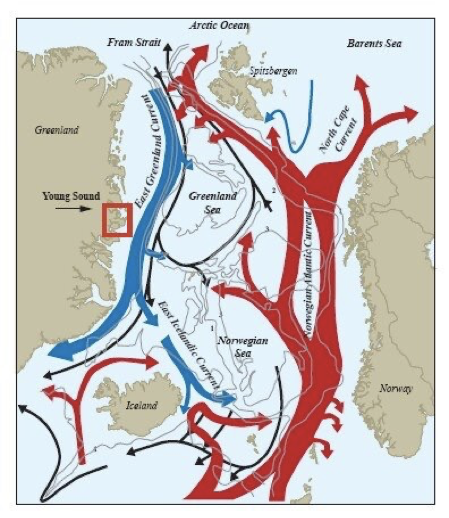 But it is extremely difficult to measure exactly the amount of redistributed heat, partly because inflowing waters follow very complex pathways while ventilating heat and mixing with cooler Arctic ocean waters.
Furthermore, an increase in the volume of inflows will raise temperatures even without any change in the inflows temperature.
Conversely, less inflow volume can still warm the Arctic, if the source waters of the inflows are warmer.
Estimating temperature changes in the source of the inflowing waters is also difficult because temperatures of the north Atlantic waters vary due to dynamics such as the natural Atlantic Multi-decadal Oscillation. So according to Ruiz-Barradas in his 2018 peer-reviewed study, between the 1980s and the 1990s, the north Atlantic warmed, but it has been cooling since then. 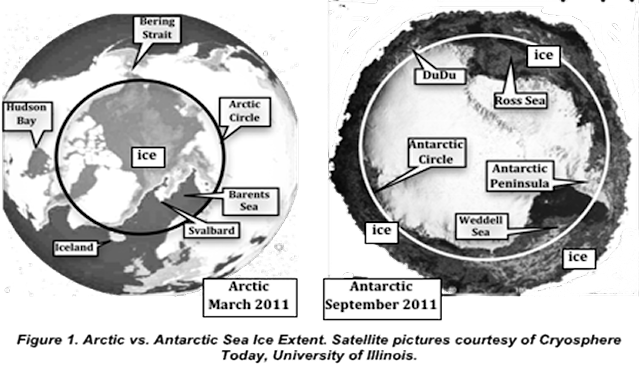 Now some researchers use the recent changes in sea ice to estimate changes in inflowing water. In Antarctica, there has been no long-term declining trend in sea ice, and that's because the Antarctic Circumpolar Current blocks warm inflows. In the photo on the right, the white circle here represents the Antarctic Circle. And because sea ice growth is unimpeded by continents, sea ice expands past the circle symmetrically, each winter until it reaches the Antarctic Circumpolar Current.
In contrast as seen in photo on the left, Arctic sea ice is confined by surrounding continents and stays inside the Arctic circle, (in black here). Yet as in Antarctica, winter temperatures are cold enough to form sea ice outside the circles, as seen in the Hudson Bay that freezes over completely each winter. More importantly, unlike Antarctica, due to the inflows of warm Atlantic water, sea ice is melted deep inside the Arctic circle, keeping ocean water ice free during the winter over most of the Barents Sea.

On a larger timescale, Moffit-Sanchez’s 2017 paper examines the relationship between changing inflows and sea ice cover over the past 3000 years. Unfortunately, there are two illustrations shown here, with reversed the timelines.
The panel on the left shows that  during the Roman Warm Period around 2000 years ago, there were strong Atlantic inflows and accordingly sea ice extent was very small. Then sea ice began to grow with the reduced inflows during the following Dark Ages Cold Period.
During the Medieval Warm Period about 1000 years ago, warm inflows increased again and sea ice again declined, but not to the same extent as in the Roman Warm Period. Then during the following Little Ice Age starting around 700 years ago, inflows became persistently low and Arctic sea ice reached its greatest extent in over 5,000 years.
When the Little Ice Age ended around the 1850s, inflows increased up through the present times and sea ice declined, but not to the low extent of the Roman or Medieval Warm Periods. 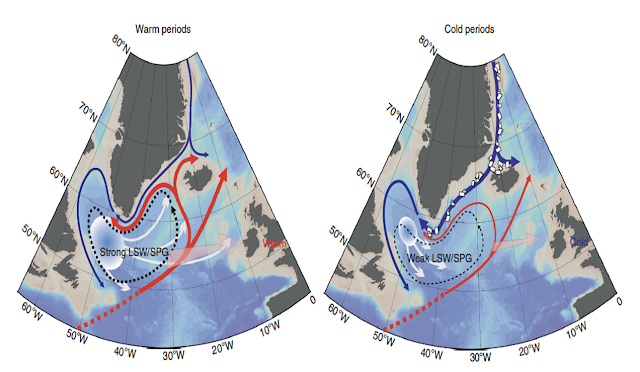 Researchers also compared the warmer Atlantic inflows during three recent warm periods to the intervening cold periods. Their results also found a strong relationship between increasing warm inflows and decreasing sea ice. During the cold periods inflows decreased and sea ice increased.
Similar studies found the warmth of the Holocene Optimum about 9,000 years ago, coincided with strong Atlantic water inflows that raised sub-polar ocean temperatures to four degrees Celsius above the temperatures observed today.
Similarly, during the most recent 5,000 years, known as the Neo-glacial, the gradual decrease in Atlantic inflows have coincided with increasing sea ice, culminating in the Little Ice Age’s greatest sea ice extent.
Clearly, both short-term and long-term studies find the extent of Arctic sea ice is regulated by changes in the warm Atlantic inflows.
Up next, part-two examines how shifting winds due to the natural Arctic Oscillation controls where sea ice is present or absent and how much thick multi-year ice survives and thus, how sea ice contributes to the control of Arctic temperatures.
And until then embrace the renowned scientist, Thomas Huxley's advice that
“skepticism is a highest of duties and blind faith, the one unpardonable sin.”
And if you appreciate the science clearly presented here, science rarely presented by the mainstream media, then please give it a like, give it a share or copy the video's URL and share it with friends through the email, subscribe to my video channel or read my book: Landscapes and Cycles an Environmentalist’s Journey to Climate Skepticism.
Thank you.
Posted by Jim Steele at 4:38 PM 2 comments: