It’s deeply disturbing to hear people uncritically regurgitate media misinformation suggesting global warming threatens our health far worse than the COVID pandemic. Scientific evidence unequivocally shows colder weather is the major killer. As Figure 1 illustrates, the percentage of all deaths attributed to weather and temperature increases during the cold months. In contrast mortalities rates fall during warmer months. Researchers examining 74 million deaths across the globe from 1985-2012 found 7.3% were caused by temperatures cooler than the optimum compared to just 0.4% attributed to temperatures above the optimum.  Extreme temperature events, both hot and cold only accounted for 0.9% of all deaths.

Likewise, a 2014 National Health Statistics reports found, “During 2006–2010, about 2,000 U.S. residents died each year from weather-related deaths. About 31% of these deaths were attributed to exposure to excessive natural heat, heat stroke, sun stroke; 63% were attributed to exposure to excessive natural cold, hypothermia, or both.”  Similarly, according to the CDC , from 1979-1999, a total of 8015 deaths in the United States were heat related while 13,970 deaths were attributed to hypothermia. So why aren’t people listening to the science?

Global warming fear is based on speculation regards what could happen in the future if global average temperatures rose 2°F to 4°F. But scary predictions are not scientific fact until their hypotheses are tested and verified. Without time machines we cannot directly test predicted outcomes for the years 2050 or 2100.  But we can observe the effects of a similar temperature change.

In the United States people have steadily migrated away from the cold Northeast to the warmer Southwest. In the Southwest they are exposed to higher average temperatures, temperatures equal to or greater than what global warming predicts they would endure if they remained in the Northeast. The good news, scientists determined that “migration from the Northeast to the Southwest accounts for 4% to 7% of the total gains in life expectancy experienced by the U.S. population over the past thirty years.” We can infer a similar benefit from global warming. A complementary study determined people that migrated to colder climates suffered ‘greater cardiovascular mortality” than people who remained in their native country.

Because the two major U.S. government agencies that track heat and cold deaths - NOAA and the CDC - differ sharply on which is the bigger killer, the public is rightfully confused. In contrast to the CDC results, NOAA argues heat is killing twice as many people as cold, but NOAA’s researchers have also been heavily invested in catastrophic global warming claims. By statistically adjusting the data via “seasonal detrending”, they remove the greater number of winter deaths in their analyses and just focus on extreme temperature deaths. They justify their adjustments arguing factors such as increased winter deaths due to flu season are not directly due to colder temperatures. But that obscures the health effects of temperature.

Colder temperatures reduce the effectiveness of our immune systems, which promotes influenza epidemics that may kill 34,000 to 60,000 people in a year. Because influenza season ends when temperatures warm, scientists are hoping warmer weather will similarly curtail the novel COVID-19 pandemic.

NOAA’s adjusted data focuses on deaths from heat waves and cold snaps. Indeed, there is a greater spike in deaths during heat waves, but research suggests heat waves have a small long‑term effect due to a “harvesting effect”. Us elderly and health compromised people are most vulnerable to extreme weather and epidemics. The “harvesting effect” describes an event during which vulnerable people who would have likely died over the following months instead died “prematurely” during an extreme event. But mortality rates drop in the following months because the most vulnerable have already passed. Researchers have found because mortality rates fall during the months following a heat wave there is no long­‑term population effect. In contrast, cold snaps do have long-term effects as researchers found no such “harvesting effect”.

Although alarming models and media narratives suggest global warming causes more extreme heat waves, scientific data disagrees. As the EPA’s heat wave index illustrates (below), there has been no increase in heat waves as the worse heat waves happened during the 1930s.

Fortunately, heat waves are short‑lived and foreseeable. Weather forecasters detect approaching high-pressure systems that bring cloudless skies that increase solar heating. High pressure systems inhibit rising air currents that normally carry heat away. And high‑pressure systems draw warm tropical air poleward on one flank while blocking cooler air from moving south. By forecasting extreme heat waves, scientists believe we can prevent most heat wave deaths. Urban heat effects are 2°F to 10°F warmer than the countryside, thus urban dwellers should be most careful. And because elderly people who lack air conditioning are most vulnerable and less mobile, we can make sure they are moved out of harm’s way. 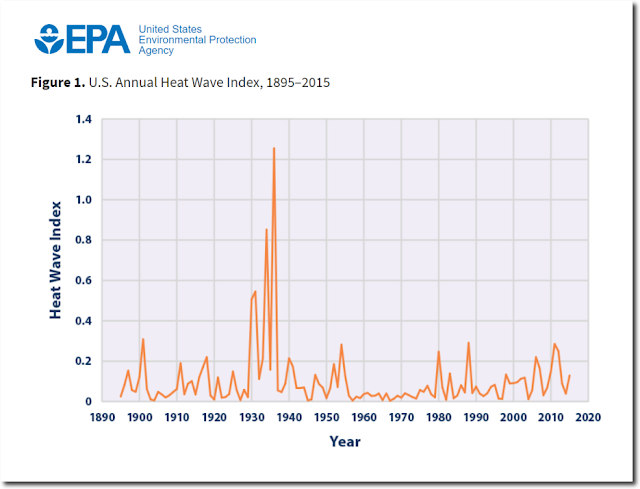 Posted by Jim Steele at 8:25 PM No comments: