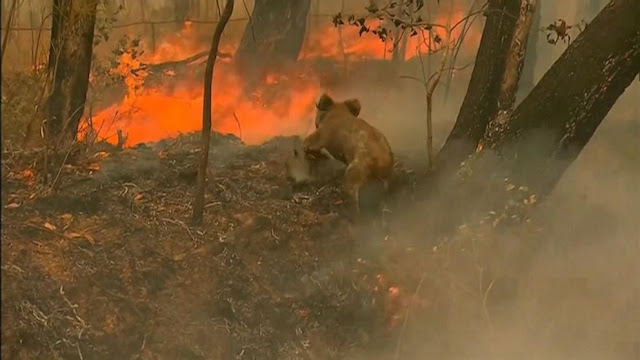 As is customary now, whenever tragedy strikes, the internet buzzes with articles blaming climate change. Hijacking the tragic Australia’s bushfires was to be expected. For instance, Microsoft’s MSN website just published “Climate deniers are cooking themselves — and everyone else”. They wrote, “Fires get worse when things are hot, dry, and windy, and climate change has provided all of those conditions in abundance. The continent has warmed by about 2 degrees Fahrenheit (a bit over 1 degree Celsius) since the 1970s, and in keeping with the predictions of climate models, Australia has experienced steadily worse droughts and heat waves over the last 30 years. The current drought may end up being the worst in history — this spring was the driest ever recorded on the continent, and back on December 18 it set a new record for the hottest day ever measured with an average temperature across the entire country of 105.6 degrees.”

How truthful is MSN? Indeed, Australia is experiencing hot dry summer weather. The map below (Figure 1) shows that most of Australia experienced temperatures far above average for December 18, 2019. But curiously the east and west coasts, as well as northern Australia were experiencing temperatures several degrees below normal. If global warming was driving the extreme wildfire season, we would expect the worse fires to be located where temperatures were warmest. But as the map of wildfires reveals (Figure 2), the warmest regions had the least wildfires, while the most fires were happening in the cooler regions. Averaging Australia’s temperatures to deceptively blame global warming for the wildfires only obscures the regional temperature effects.


The greatest 2019/2020 burned area is concentrated along the eastern coast in the states of New South Wales and Victoria. Both areas are known for habitat that is very susceptible to extreme fire danger. But are the recent fires worse than ever?  History says NO! In February 1851, the Black Thursday bushfires incinerated about five million hectares (about 1,900 square miles). Around 12 lives, one million sheep and thousands of cattle were lost.  Temperatures reached record extremes of about 47°C (117°F) in the shade.  In contrast, MSN attributes the 2019 December fires to a misleading average temperature across the whole country of 40.6°C (105°F).

If temperature and precipitation cannot be attributed to the increasing trend in wildfires, what other factors should be considered? As in California, Australia has experienced a tremendous increase in human ignitions. Arson is a huge problem. As government investigations reveal (Figure 4), deliberately set fires account for 64% of all ignitions, while only 11% of all wildfires are due to natural lightning ignitions.

Furthermore to the north, tropical and subtropical regions are being invaded by foreign grasses that are easily ignited and provide greater surface fuel continuity allowing fires to spread over greater areas. Likewise, humans must manage forest floor fuel loads. The easiest solution is prescribed burns. However, that solution is often resisted because people do not want to experience the accompanying smoke. But until prescribed burns are allowed to be judiciously applied, the public becomes increasingly vulnerable to larger more severe wildfires as endured in 2019.

Contact: naturalclimatechange@earthlink.net
Posted by Jim Steele at 11:00 AM 2 comments: