On October 8th a resident of Pacifica California reported that 2 birds fell dead from the sky onto his deck. That would startle anyone and raised grave concerns. People began suggesting possible causes: a mid-air collision, West Nile virus, , wildfire smoke, and of  the climate crisis. Some pointed out they had found a dead bird in their yard. Others referenced a massive die-off of migrating birds in early September over Colorado and New Mexico suggesting thousands, maybe a million birds had died. The speculated cause of death was wildfire smoke, starvation and a cold snap that dropped temperatures from 90°F to near freezing in a matter of hours. Sky-is-falling fears and fearing a “ bird flockalypse” one person wrote, “if birds are dying, we humans are next”. 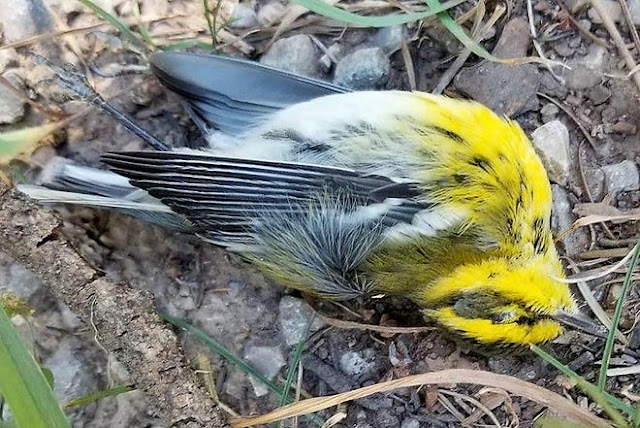 Good scientists must examine all likely factors. So, I investigated the stories behind most documented bird die-offs.  For the case of a single dead bird found in someone’s yard, that bird may have died from disease, flown into a window, or simply died of old age. Most of our sparrows, warblers and hummingbirds don’t live longer than 13 years. Twenty-five to fifty percent of young birds die in their first year.

California asks people who find dead birds to report them to local vector control agencies so the birds can be tested for disease, West Nile Virus in particular. For the year 2020, to date about 5200 dead birds have been reported in California, a fourth of which were tested. Only 320 have had the virus, while most died of unknown causes. (Mass die-off of 10 or more birds are not included in their reports.) Los Angeles county reports the most dead birds, while rural Sierra County reports none. That suggests higher population centers with more eyes find more dead birds.

In contrast, the die-off of hundreds and thousands of birds, often during migration requires very different explanations. Good scientists must place such unusual events into a historical context. Was the September 2020 die-off in the southwest so historically rare that we can attribute it to how humans have recently altered our environment? Or, are such die-offs relatively common occurrences. Scientists calculate millions of birds die each year during migration in North America. We just don’t know all the causes, or what percentage of dead birds are actually observed.

A 2007 scientific paper reviewed reported bird die-offs across the globe and major die-offs were observed more than once a decade for the past 120 years. Some happen during spring or fall migration, other die-offs happen while on the breeding grounds. Most are associated with cold weather. On New Year’s Eve night in 2011, people reported dead black birds “raining” from the sky around an Arkansas town. People blamed everything from secret military testing and UFOs to bad weather. Investigations later determined 5000+ birds had died from blunt force trauma, which confirmed reports that birds were flying into buildings and towers. Apparently, someone attempted to scare away a roost of a million black birds, which are agricultural , with fireworks. Black birds have poor night vision which explains their collisions with houses.

The most common cause of other cases of bird deaths was bad weather - heavy rains, cold or snow. For example, a sudden cold spell across southern Germany, Austria and Hungary caused birds numbed by the cold to fall from the sky. Residents eagerly brought still living birds inside to warm, then loaded 89,000 birds onto planes and trains, sending them south to a warmer Venice, from which birds continued their migration.

In March 1904, a small town in Minnesota reported dead birds falling. Investigations determined nearly a million birds, all Lapland Longspurs, died during a heavy rainstorm. Over 750,000 birds were counted on just 2 small lakes that were still covered with  ice. Autopsies determined most birds died from blunt force trauma as birds crashed into the ice or buildings. 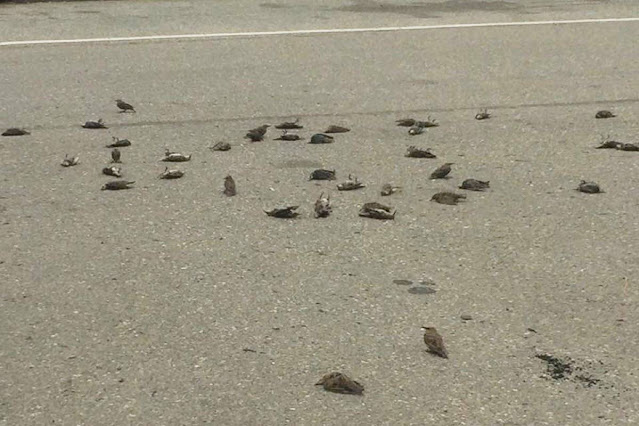 Migratory deaths of thousands of birds this September in southwest USA likewise, appear to be driven by a cold snap. USGS experts have indeed told me that the best explanation is still a sudden cold snap that dropped temperatures from the 90s to near 30 F, killing birds already stressed by the rigors of migration. My analysis of archived EPA air quality doesn’t suggest smoke particulates coincided with that die-off, but officials have not yet ruled out wildfire smoke. Corpses are still being autopsied and whether or not there is lung damage could implicate wildfire smoke.

I suspect the most likely cause of the 2 birds falling dead from the sky in Pacifica was due to exhaustion from flying out over the ocean and trying to return to land. I have been on pelagic bird trips miles from shore where exhausted land birds flop down on our boat. Several studies have been performed on the Farallon Islands which are 26 miles offshore due west of Pacifica. Several studies note weather conditions, such as offshore winds that we naturally experience this time of year (ie Diablo Winds that also spread human ignited fires), cause birds to veer off course and fly out to sea. They can be further confused by the offshore fog bank. Many of the birds having arrived on the Farallons are later observed to be headed back to shore, suggesting they are guided to our coast if they can see land when not obscured by fog. Furthermore most of the Farallon birds are young birds born that summer and are typically less efficient at finding food and more likely to become emaciated after an extended overseas flight.

Of course as for all tragedies, media like the Guardian always blame the “climate crisis”, and downplay cold weather.  They push flockalyptic fears even though there is no support to suggest the sky-is-falling or ecosystems are collapsing. Birds have indeed suffered from loss of habitat, overhunting and window crashes. Fortunately, people are working to change that. I removed my bird feeder because it attracted birds that flew into . But it is natural weather events that have caused most major die-offs. Yet still birds have risked bad weather events for thousands of years in order to enjoy the benefits of migration. 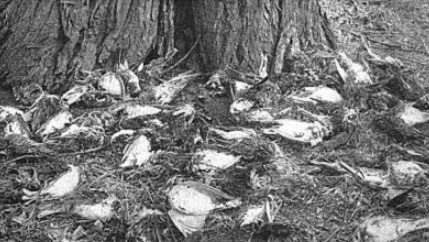