There is a saying in the journalistic community: ‘Bad news is  good news! Good news is no news!” Bad news sells papers. It’s internet click-bait. So, we’re bombarded with a disproportionate amount of fearful news. Unfortunately, scientific journals also succumb to the same profit incentives. Indeed, pictures of thousands of suffocated fish floating belly-up is very disturbing. However, media outlets amplified our fears with headlines like “A Horrifying New Study Found that the Ocean is on its Way to Suffocating by 2030”. Only slightly less sensational, the Smithsonian promoted one of their researchers articles as “Why Our Oceans Are Starting to Suffocate”, while the NY Times suggests “World’s Oceans Are Losing Oxygen Rapidly”.

Changing oxygen concentrations is determined by the balance between oxygen addition versus consumption. Oxygen is only added at the surface, via diffusion from the atmosphere or via photosynthesis.  The chemical wizardry of photosynthesis uses sunlight to break apart water molecules and generate new oxygen while creating organic matter. Although this organic matter forms the base of the ocean food web, its digestion and decay consumes oxygen.  Paradoxically, wherever the surface ocean food web is most bountiful, the waters below lose the most oxygen.

To analyze natural- versus human-caused losses of oxygen, we must consider how the supply of nutrients for photosynthesis differs between the open ocean and coastal oceans. In the open ocean digestion and decay of sinking organic matter consumes oxygen and releases nutrients  to be recycled. Those nutrients must then be upwelled from dark subsurface waters back into sunlit waters.

In contrast, the supply of nutrients to coastal waters is greatly affected by river discharge. In the early 20th century, chemists learned to convert atmospheric nitrogen into biologically useful nitrogen fertilizer. Starting around 1950, agriculture doubled, then tripled their use of synthesized fertilizer. While greatly benefitting  human food supplies, increased fertilizer use coincided with decreasing coastal oxygen.

Coastal populations and sewage also increased. Sewage and fertilizer run-off combined to stimulate coastal algal blooms that produced excessive organic matter which sank to shallow (< 100 meters) ocean floors, where its decay consumed bottom water oxygen. Along the Texas-Louisiana coast, the term “dead zone” was first used by shrimp fishermen to describe the resulting seasonal disappearance of shrimp and other invertebrates from the ocean floor.

The good news is people are now preventing and restoring dead zones. Sewage treatment plants extract solids and recycle it as fertilizer and farmers are engaging in more judicious use of fertilizers.

In contrast, the open ocean contains natural, permanent “oxygen minimum zones” (OMZ) at depths between about 200 and 800 meters. OMZs are maintained by the constant supply of sinking organic matter but OMZ size fluctuates. While some researchers blame global warming for any OMZ expansion, the evidence points to natural climate change that affects upwelling and ocean circulation. 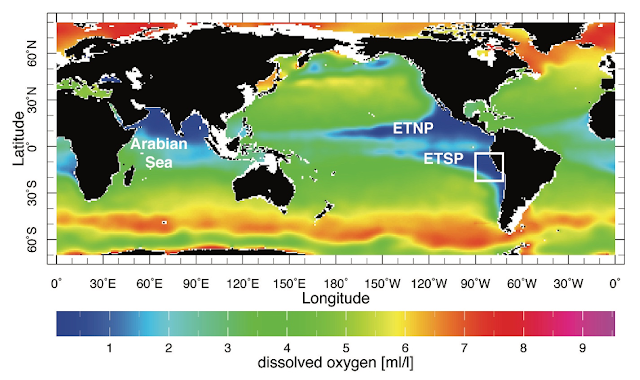 For example, in the eastern Pacific natural El Nino events reduce photosynthesis which decreases the supply of organic matter. Less decay causes OMZ’s oxygen to increase. Conversely during a La Nina, enhanced upwelling stimulates photosynthesis and organic matter production. Increased decay then expands the area of depleted oxygen.  Similarly, during the Little Ice Age, upwelling and photosynthesis off the coast of Peru was reduced and oxygen increased. Since the mid 1800s, upwelling has increased and Peru boasts one of the world’s largest fisheries. However, the increase in decaying organic matter has steadily consumed oxygen, and Peru’s expanding OMZ is also the world’s largest.

Open ocean OMZs are ancient, allowing a highly diverse ecosystem to evolve and adapt to the low oxygen environment.  A great diversity of jellyfish, squid, krill, sea snails, and other invertebrates inhabit the OMZs. Sperm whales (i.e. Moby Dick) evolved to hunt abundant squid at those depths. Researchers estimate that 95% of the global ocean fish mass inhabits OMZ depths. Most of these abundant organisms migrate nightly to feed in surface waters, then during the day migrate back to depths where they digest their food, further reducing the oxygen.

Finally, the claim that global warming is causing OMZ’s to expand and oceans to suffocate is largely based on simplistic physics that less oxygen will dissolve from the atmosphere into warmer waters. Although that is true, the scientific consensus still finds most of the oceans’ surface is supersaturated with oxygen. That’s because warmer waters also stimulate photosynthesis and produce more oxygen. Some researchers found photosynthesis could contribute 2.4 times more new oxygen than is absorbed from the atmosphere.  Accordingly, scientists estimate  50% - 80% of the earth’s oxygen is produced by ocean plankton. Based on natural ocean dynamics and its historical changes, we can breathe easy. Global warming is not suffocating our oceans!

Posted by Jim Steele at 6:56 PM No comments: