During the 1980s, the media and a few scientists warned that island nations in the tropical Pacific would soon be wiped from the face of the earth, drowned by rising sea levels attributed to rising CO2. The Maldives’ Environmental Affairs Director warned that an 8 inch to a foot rise in sea level in the next 20 to 40 years would be catastrophic. The Guardian’s headlines wrote of islanders abandoning their island home to become environmental refugees. In 2002 supported by Greenpeace, Tuvalu threatened to sue the United States and Australia for excessive carbon dioxide emissions. The Smithsonian magazine asked, “Will Tuvalu Disappear Beneath the Sea?”. However, the Smithsonian also admitted “not all scientists agree that Tuvalu’s future is underwater. Some critics have branded island leaders as opportunists angling for foreign handouts…while people and organizations sympathetic to Tuvalu are “eco-imperialists” intent on imposing their alarmist environmental views on the rest of the world.” 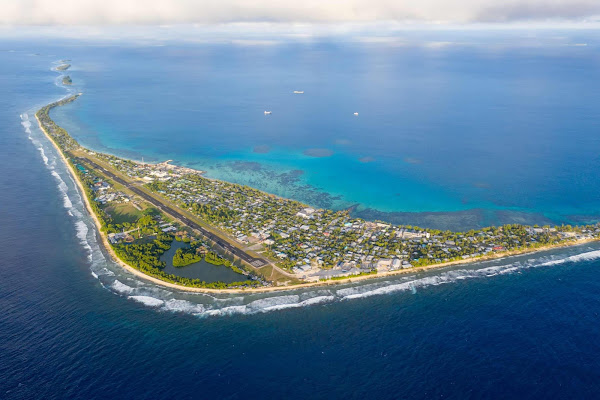 Theoretically, the fear of devastating rising sea levels was quite legitimate given the onslaught of global warming narratives and the fact the entire atoll nation of Tuvalu only averages 6.6 feet above sea level. So naturally, Tuvalu’s fund-seeking prime minister, Saufatu Sapo’aga, told the United Nations that global-warming’s threat to his island was no different than “a slow and insidious form of terrorism”. In reality, the latest science published in 2018 combined past aerial photographs and satellite imagery to report a net increase in Tuvalu’s land area. Built on coral reefs, the atoll’s many islands will change shape as coral debris and foraminifera are added to the land on the leeward side, while losing area on the windward side. Nonetheless, 74% of the islands increased in size with only 27% decreasing. Furthermore, Tuvalu’s growth is mirrored in other islands region-wide. A similar study examining “30 Pacific and Indian Ocean atolls including 709 islands, reveals that no atoll lost land area and that 88.6% of islands were either stable or increased in area, while only 11.4% contracted.” So how can coral islands grow in an era of accelerating sea level rise? 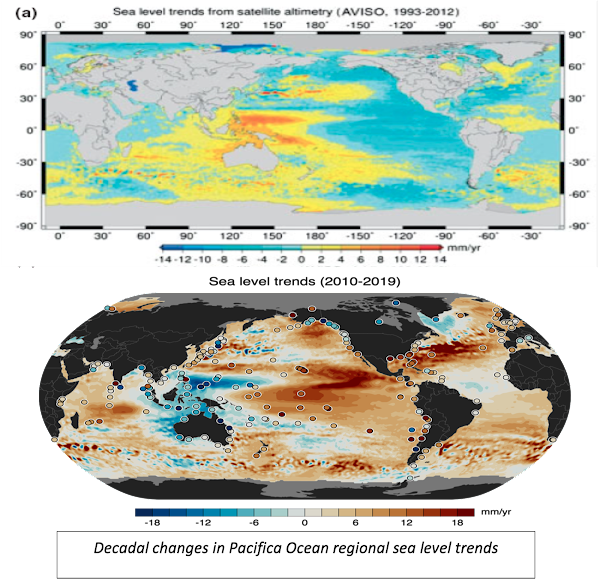 The answer may be, in contrast to global warming theories, that regional sea levels have not been rising by 3+ millimeters/year nor has the rise accelerated. The scary misinformation is partly due researchers using short¬¬ term sea level records that are incapable of accurately measuring the long-term trends. Pacific sea levels rise and fall over decades (see maps above). A single El Nino event can temporarily raise or lower island sea levels by 300 millimeters (mm). Thus, one study using just 6.8 years of data determined sea level at Tuvalu had fallen by 8.9 mm/year in contrast to a 2008 study using 15.5 years of data claiming sea level rose by 5.9 mm/year.
In Tuvalu Not Experiencing Increased Sea Level Rise (2004), the climate skeptic Eschenbach reported climate scientists, who had averaged 27 regional stations using data greater than 25 years, had determined only a 0.8 mm/year trend with no acceleration. Eschenbach further detailed how Tuvalu’s erosion and the saltwater intrusion into the drinking water was not caused by rapid sea level rise. Among other issues, having paved over 10% of the island, the underground reservoir of freshwater was not being replenished, as rainwater was instead shunted away to the sea. Meanwhile the mining of sand and reefs for construction had disrupted the natural dynamics that maintained the island’s shape.
In “The Scientific Basis” of the IPCC’s 2001 report, they determined based on tide gauges “mean sea level rise during the 20th century ranged from 1.0 to 2.0 mm/year” and no detections of the predicted acceleration. Still, to bolster a theory unable to link rising CO2, warming, and accelerating sea level rise, Vermeer and Rhamstorf (2009) created a climate change model that projected a sea-level rise that ranged from 2.4 ft to 6.2 ft for the period 1990 –2100. In contrast, Australia’s NSW principal Coastal Specialist observed a consistent trend of weak deceleration at each gauge site throughout Australasia over the period from 1940 to 2000, and in 2011 published Is There Evidence Yet of Acceleration in Mean Sea Level Rise around Mainland Australia?
There were several more conflicting issues. Scripps’ esteemed oceanographer Walter Munk found IPCC 20th century sea level rise estimates of 1.5 to 2.0 mm/year were too high. In 2013, Gregory et. al wrote Twentieth-Century Global-Mean Sea Level Rise: Is the Whole Greater than the Sum of the Parts? They solved the problem of an unbalanced sea level budget, by simply increasing previously estimated contributions from ocean warming and meltwater. In contrast, Harvard’s Mitrovica solved the same problem by lowering 20th century mean sea level rise to just 1 mm/yr.
Meanwhile, new satellite era estimations suggested the long-awaited theoretical acceleration had arrived with sea level rising 3.5 mm/year from 1994-2002. Yet, like Tuvalu, such short periods of measurements are usually biased by natural variability and cannot accurately measure long term trends. Accordingly, subsequent satellite measurements between 2003 and 2011 found global sea level suddenly decelerated to 2.4 mm/year. To solve that conflict with global warming expectations, Cazenave et al. added the estimated water trapped on land during La Ninas to observed sea levels, plus added another 0.3 mm/year glacial isostatic adjustment to account for ocean basin expansion. Thus, she raised global warming’s rising sea level trend to 3.3 mm/year for the past 20 years, a rate commonly cited today. 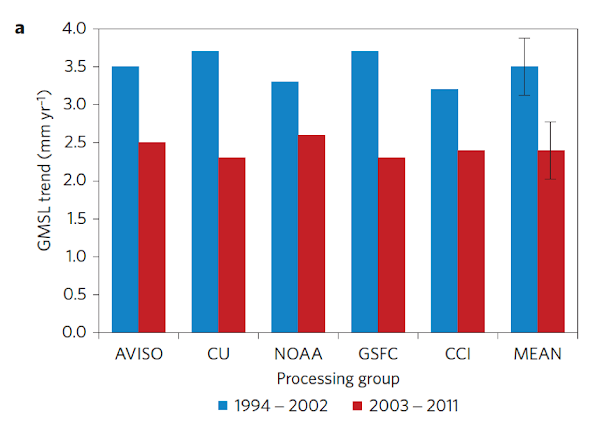 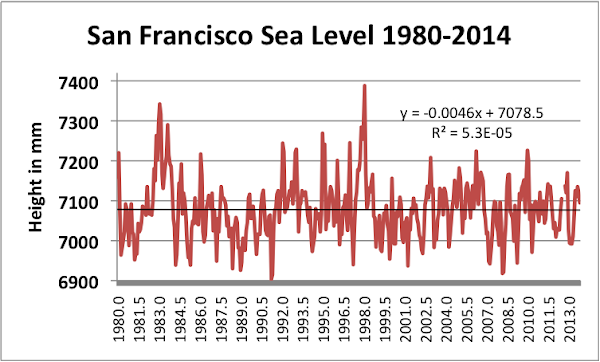 Robustly evaluating the dangers of rising sea levels for Pacific islanders, in 2020 Alberto Boretti published Relative sea-level rise and land subsidence in Oceania from tide gauge and satellite GPS. Using only the 6 regional tide gauges with 100+ years of data, he found after subtracting subsidence effects from the +1.3 mm/year average relative sea level rise, the average absolute rate of rise computed to an astonishingly low +0.125 mm/year; with no signs of acceleration or evidence of thermal expansion. In addition, Boretti’s special Tuvalu case study, also accounting for subsidence, determined from 1977 to present an absolute rate of rise of just +0.157 mm/year. That rate of sea level rise from increased ocean volumes will only add about 0.6 inches in 100 years. The worrisome “sea-level rise of Tuvalu is due to subsidence rather than the increasing volume of the ocean waters” from thermal expansion or glacial meltwater. The best approach for Tuvalu’s prime minister would be to stop ill-advised urbanization that leads to subsidence and threatens its fresh water supply and stop covering his political rump by shifting the blame to climate change. Still stopping subsidence might not be possible. After all, in the late 1800s, Charles Darwin correctly surmised that atolls like Tuvalu were formed by fringing reefs attached to a naturally subsiding extinct volcano. 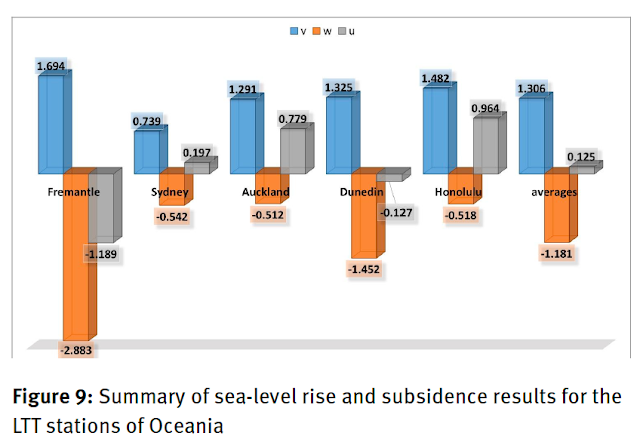