Each day I attempt to synthesize curiously divergent views in the news. In the morning I listen to National Public Radio (NPR) and in the evening I watch Fox News. However, I’m increasingly disturbed by NPR’s unbalanced reporting on wildfires. With every wildfire report, NPR now adds climate crisis comment but ignores wildfire science. I learned more about heat transfer and wildfires as a boy scout. I also expanded my wildfire science as an ecologist researching California’s Sierra Nevada ecosystems for 30 years and I must say an honest NPR would focus on the 3 major issues needed to minimize wildfire devastation.

Politicians and media journalists that claim reducing CO2 will save us from bigger wildfires are only exacerbating public fears and promoting ineffective policies.

As a Boy Scout I was dropped off in a snow-covered Maine wilderness with temperatures below 32°F. My task was to build a life-saving campfire with only one match. Survival required finding enough flammable fuel. Fortunately, there was an abundance of small dead twigs on the lowest branches of most trees. With ample airflow, those small diameter fuels (A) are reliably ignited with a single match. Wildfire experts refer to small twigs, pine needles and dead grasses as 1-hour lag fuels because those fuels sufficiently dry out in an hour of dry weather, with or without global warming. Varying abundances of 1 hour fuels determine how readily wildfires ignite and spread. Thus, during fire season wildfire experts assess 1 hour fuels daily. Though easily ignited, twigs or dead grass have very little mass to sustain a fire. So, to build my survival fire I carefully added a layer of slightly larger sticks (B) that could be quickly ignited before heat from my twigs was exhausted. Added sticks can’t be too large. Larger branches and logs will absorb small amounts of heat without igniting. 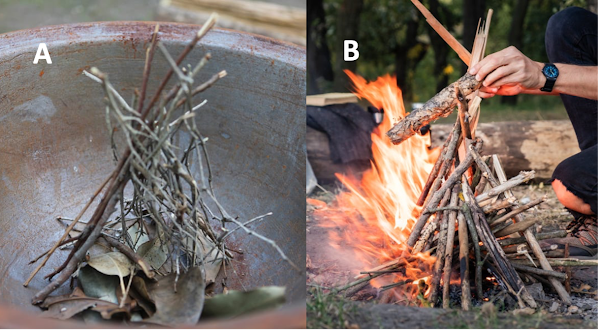 My one match generated temperatures exceeding 1000 °F, but only for a short time. But with the right balance of 1 hour fuels and sticks for kindling, my survival fire was secured. Ample kindling is the key to igniting and sustaining every large fire. In California, accumulating ground fuels supplied the kindling allowing a spark from a tire rim scraping asphalt to ignite dead roadside grasses, that then expanded into the large Carr Fire. A spark from a rancher driving a stake into the ground ignited the surrounding dead grass, igniting California’s 2nd largest fire, the Mendocino Complex Fire, even though regional maximum temperatures had been 3°F cooler than the 1930s. Sparks from powerlines in November caused California’s deadliest Camp Fire; and powerlines likewise ignited California’s largest 2021 fire,the Dixie Fire.

All those conflagrations were caused by human ignitions, and experts calculate that 84% percent of America’s wildfires are started by humans. Good science cannot attribute an increase in wildfires to climate change unless it first accounts for increased human ignitions. Additionally, once ignited, fires produce such tremendous heat, ground fuels are readily dried out as the fire approaches. Swaths of burning grasses make great kindling, generating temperatures reaching 1400°F which easily ignites accumulated ground fuels and shrubbery. Those ground fuels then generate temperatures reaching 2000°F. Claims that an insignificant 2°F increase from global warming makes wildfires bigger and more intense appears to be politicized fear mongering. My survival fire started in below freezing temperatures and major conflagrations burned during the Little Ice Age. So best to prevent increased ignitions by burying powerlines and by removing 1 hour fuels from roadsides. 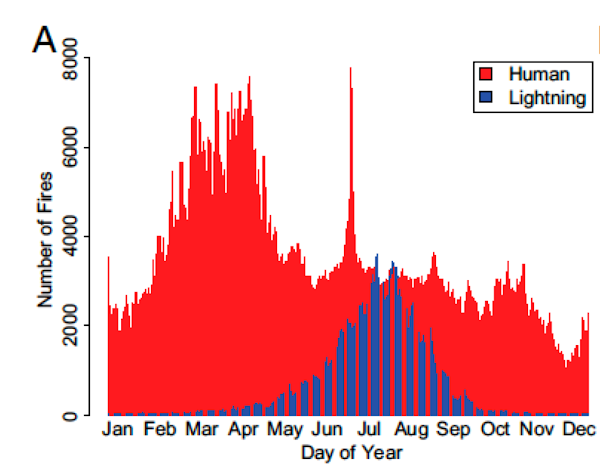 In NPR’s defense, gullible journalists are fed cherrypicked “science” from researchers seeking fame and fortune by promoting climate crises. Naïve journalists are provided graphs of “unprecedented” increasing wildfire trends, but only since 1970. The longer term trend, as exemplified by Oregon Department of Forestry, is rarely publicized widely. Furthermore crafty researchers blame global warming by showing how it theoretically dries out fire fuels, but simple good physics then gets grossly misapplied.

For example, widespread invasive annual grasses have also increased landscape aridity, and increased the probability of ignitions and increased burnt area extent. Non native cheatgrass earned its name because it grows during the winter and early spring, consuming soil moisture and depriving native grasses. By growing in the west’s moister winter season, cheatgrass expanded into arid regions where extensive grasslands had been prohibited. Added carpets of flammable cheatgrass engulfed sagebrush ecosystems, covering bare ground that had once limited large or frequent fires. And carpets of cheatgrass can easily carry fires into forests and other ecosystems.

In contrast native perennial grasses growing during the summer maintained high moisture content and didn’t go dormant until late August. Their high moisture content reduced the probability of both grass fire ignitions and its spread. But native grasses were soon out competed by moisture hoarding cheatgrass which dies, dries, and becomes highly flammable by April and May. As landscapes became dominated by cheatgrass, the fire season intensified and expanded by 2-3 months. Although NPR had once mentioned the destructive effects of invasive grasses, NPR now pushes climate change. But the drying out of western grasslands is not due to climate change. Its due to natural weather cycles and the landscapes’ conversions to moisture sucking invasive annuals. Finally, cheatgrass conversion correlates too well with maps of western USA’s most active fire regions. Restoring native grasslands would be another best practice to reduce the west’s larger wildfires. 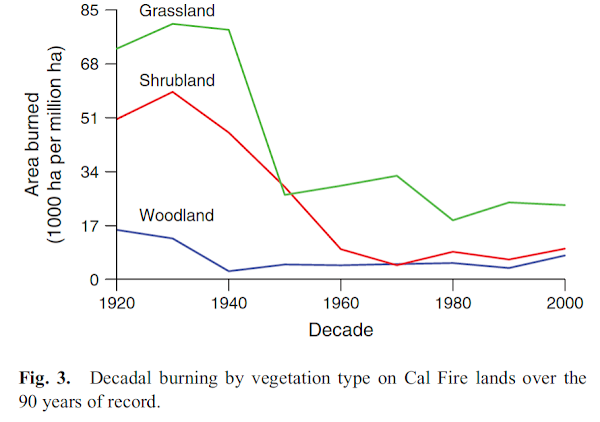